These words are as true today as they were at the time they were written. Evolution has revolutionized how everything in biology is perceived. Not only does it help provide answers to questions of “How?” and “Why?” that exists in biology but it also allows us to make sense of current scientific findings.

Implications Of The Origin Of Life

Darwin’s writing was popular with the general public. His most important work was On the Origin of Species, a concept-filled publication that addressed how organisms that exist today came to be so unique and varied. The central concept of this book, namely evolution by natural selection, has be described as ‘the survival of the fittest’. Meaning that any organism which is more successful, in terms of surviving and breeding more frequently than other organisms, will propagate and thus its genes will persist through to the next generation at a greater frequency.

This concept of evolution by natural selection has dramatic implications. Rather than simply allowing small adaptations to be understood, the concept may be used to envisage how small changes could accumulate over long periods, with each small change providing some selective advantage. As a result it is possible to explain how something as intricate as the vertebrate eye may have developed, and even to suggest that all living species today have evolved from the same starting point - a common ancestor.

In the discussion of the origins of life humans were deliberately not mentioned. This is because humans had, before evolutionary theory, been regarded as a class apart from the rest of the animal kingdom. Although animal species were not thought to be related to one another they were still regarded as more similar to one another than they were to humans. The general consensus was that humans were created or designed by a deity and were completely unrelated to other animals. Although the subject is still hotly debated, it is now widely accepted that humans are related to other animals as they too evolved from the common ancestor mentioned before. Not only this but various lines of evidence, including genetic evidence which compares how similar conserved genes are between different species, show that the closest living relatives of humans are chimpanzees. 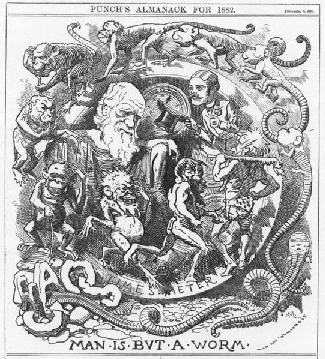 Darwin’s impact, however, is not restricted to these questions of origins; it has had a huge effect on current day society. Doctors now have to consider antibiotic resistances when prescribing drugs. In a patient, a few bacteria that are resistant to an antibiotic will survive. This will select the genes that cause resistance to be present in future populations and they can then reproduce spreading this resistant characteristic. There have also been implications in how animals are treated in society. Prior to evolutionary theory it was thought that animals had been created for humans’ benefit and as such could be treated anyway people chose.

Alterations in this world view have led to changes in legislation with the emphasis being on animal welfare where previously any mistreatment of an animal was only treated as a crime if someone else owned the animal when it was treated as an act of vandalism. The close relationship between humans and old world primates has also led to legislation outlawing any animal experimentation on these primates in Great Britain. These are only a couple of the wider implications that Darwin has had on contemporary society; other articles in this section seek to show Darwin’s impact on a wide variety of areas such as electronics, theology, perceptions of global warming and the eugenics movement.

Darwin’s impact on Biology has been immense and unmatched. It explains the variation in organisms and provides clues about how life may have developed from a common ancestor. It helps to illuminate mysteries about ourselves and gives us the skeleton of a history that can be filled out over time with the accumulation of more evidence. Darwin has provided an enormous leap forward in the pursuit of understanding life and its origins, revolutionising the way biology is understood. This provided a scientific revolution in its purest sense as imagined by Kuhn; where once evidence for a divine creator was seen in the perfection of organisms, now evidence of adaptation to an environment is observed and unexplained oddities in an organism's form are used to establish its evolutionary past. Evolution has not only changed our understanding of biology but changed the questions we ask and the answers which are acceptable, providing a scientific rigour to an area which previously lacked this. So in conclusion vive la revolution!