Darwin’s time spent at Christ’s was a period of great intellectual growth in his life, and it is here that some of the major ideas that culminated in his evolutionary theories were presented to him. The influence of John Stevens Henslow, a botanist and geologist at Cambridge, was of the utmost importance in shaping Darwin’s life, and the Cambridge University Botanic Garden and herbarium still hold compelling examples of the clues from nature which lead us to a theory of evolution. Considering his development while at Cambridge is especially notable for us, the current students of Christ’s College, as we make our own academic progress nearly two centuries on.

The Man Who Walks With Henslow

Charles Darwin attended Christ’s college from 1828-1831. He completed his BA without honours, and did not proceed to the theological training generally expected following a normal degree. Darwin was not quite the model student, and apparently missed many of his lectures, more interested in extra-curricular activities. He most certainly did attend the lectures of John Stevens Henslow, however, the professor of botany during Darwin’s time at Cambridge, and perhaps the single most influential person in leading Darwin onto his remarkable path.

Henslow had taken up the post of Regius Professor of botany in 1825, having held the position of Professor of Mineralogy before that from 1822, only 4 years after his graduation. Even without his impact on Darwin, Henslow has a considerable legacy, cataloguing many of the plants local to Cambridge in one of the oldest volumes of British flora, and founding the new Cambridge University Botanic Garden in 1831. Darwin became great friends with him, and was known as ‘the man who walks with Henslow’ by the other professors. On Friday evenings Henslow held open house, and Darwin was a regular attendee of these scientific soirees. In his memoires of Henslow, Darwin writes at length on how much he enjoyed and learnt from his time with Henslow, and extensively praises his character. It was also Henslow who suggested to Captain FitzRoy that Darwin should be taken on the voyage of the H.M.S. Beagle, and while on this pivotal journey Darwin continued to be aided by Henslow, who received and looked after the specimens Darwin sent back as well continuing to offer advice.

Professor Henslow may have also introduced Darwin to some of the key developments that led specifically to the theory of evolution. In the early 19th century, many academics were beginning to question the supposed immutability of species – created by some divine event, remaining the same ever since. The fossil record was a crucial factor in this, but the many differences between individuals of the same species were another problem which was hard to understand according to the traditional view. Indeed, in the first chapter of On the Origin of Species Darwin uses examples of the large amounts of inheritable variation in domesticated plants and animals to introduce readers to the concept of evolution.

Henslow was clearly interested in variation between members of the same species, as shown to this day in the Cambridge botanic garden. Along the main walk, running through the centre of the garden, there is a collection of subspecies of Pinus nigra, the black pine. Henslow placed individuals with noticeably different morphologies opposite one another, the most striking contrast being Pinus nigra subspecies nigra and P. nigra subspecies salzmanii. The two individuals lie across the path from one another, and comparison is naturally made between their shapes. P. nigra ssp nigra is from Austria, and its upright, conical shape with dense bunches of short needles on its few branches allow the heavy snowfall of the region to fall off without damaging the tree. The Spanish P. nigra ssp salzmanii, meanwhile, does not face this problem in its habitat, and correspondingly has an open, spreading structure, branching from much lower down the tree. The two trees showing such clear adaptations to suit their original habitat, even when only a few metres away from each other in the Cambridge botanic garden, provide a fine example of how a species can diverge and adapt according to the conditions it faces. 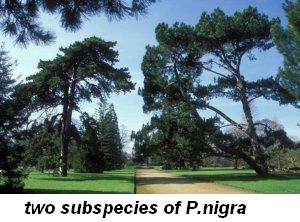 Smaller, but no less important, intra-species comparisons made by Henslow can be found in the Cambridge University Herbarium. Henslow would often attach two or more pressed plants of the same species to a single sheet of paper, clearly showing any differences between the individuals. Many of his samples also show ‘monstrosities’, where some feature or features differ exceptionally from the standard form. ‘Monstrous’ traits could be anything from very much enlarged organs, to extra limbs or structures being unusually shaped. Nowadays we understand that these arise through mutations in important genes which control the development of whole structures. Even though Darwin was not aware of the genetic basis for monstrous individuals, they clearly showed that new traits can develop among members of a species, sometimes very drastic. Though monstrosities are rarely beneficial, their heritability demonstrated how other useful traits might arise and be propagated. Furthermore, monstrous individuals were important in making evolutionary concepts imaginable. That such large features could suddenly arise in some individuals of a species made it far easier to picture the natural development of major organs, and the steps by which all the disparate forms of life could be linked to one another.

What Happened To Henslow?

In his later years Professor Henslow retired somewhat from science, to focus on being Rector of Hitcham, a village in Suffolk. Perhaps unsurprisingly due to his religious life, he did not accept much of Darwin’s greatest work, but the two remained good friends. His influence was pivotal in shaping Darwin’s life, and thus in bringing about On the Origin of Species. The importance of Darwin’s trip on the Beagle, which only happened thanks to Henslow, is widely acknowledged, but by introducing Darwin to important concepts of variation and adaptation he perhaps laid the most important foundations for the development of evolutionary theory. 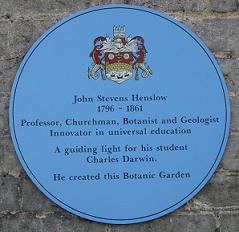 Many thanks to Gina Murrell of the Department of Plant Sciences Herbarium and Professor John Parker, Director of the Cambridge University Botanic Garden, for much of the information used here.