Animals have very different body plans. Compare, for example, a centipede to a bird, or a mouse to a fly, and it’s easy to see the differences. How has evolution produced such diversity? One of the most amazing discoveries in the last couple of decades has been the demonstration that the same sets of genes control the development of animal form. These genes, called Hox genes, act like genetic switches to turn on and off other genes. The last common ancestor of all animals had a similar set of Hox genes to living animals; over time some have evolved new functions, others do the same thing in all animals.

A Quick Guide To The Origins Of Animals

When Darwin wrote On the Origin of Species scientists already knew about the Cambrian explosion; the sudden appearance of animal fossils in rocks about 500 million years old. The lack of ancestors in earlier rocks was a problem Darwin recognised. Fossils of animals have now been found in much earlier rocks with groups of animals now represented by the likes of sponges and jellyfish being found in rocks as old as 610 million years. Scientists have also been able to use DNA from living animals to estimate the date when all living animals last shared a common ancestor. This estimate comes in at up to 1 billion years ago! Clearly animals are very old.

In the hundreds of millions of years of animal evolution, a remarkable diversity of creatures has existed. Today there are around 35 animal phyla (a phylum is the taxonomic rank below kingdom, so humans belong to the kingdom of animals, and the phylum of chordates because we have a nervous chord).

By comparing the DNA of living animals we can produce a family tree. A group of unicellular organisms called choanoflagellates come out as the closest living relatives to animals. They are simple organisms with only one cell and a long tail called a flagellum which is used to swim about; they look a bit like sperm! The first true animals which branch off the animal family tree are called the cnidaria and the sponges. Cnidaria include things like sea anemonies, corals and jellyfish. Sponges of course, include sponges.

Two major groups of animals are left, the deuterostomes and the protostomes, together referred to as the bilateria. These are the more familiar animals. The protostomes include arthropods (flies, spiders crustaceans etc) and lophotrochozoa (brachiopods, snails, worms etc). Deuterostomes are the group humans belong to, alongside other chordates, sea urchins and starfish.

One common feature amongst all these animals is that they are made up of repeating structures, for example our vertebrae or the rings of worms. Through animal evolution many of these segments have evolved special functions. The basic repeating parts have been multiplied and modified in different ways in different animals; this is how the diversity of animal form has been produced.

What Are Hox Genes?

Hox genes are a group of regulatory genes that control the timing and route of development. They’re a bit like lighting engineers at a concert; they control when and where a light goes on, how strongly and for how long it is switched on. They all cluster together on the genome and play a major role in the development of animal segments with different Hox genes being expressed in different segments. Hox gene evolution played a big role in the diversification of these segments. But how do we know this?

Homologous structures are things that are similar because they evolved from one common ancestor. For example the bones in your arm are homologous to the bones in a mouse’s foreleg. In the same way genes in different animals can be homologous. This is the case for Hox genes. Biologists have been able to isolate Hox genes from many animal groups.

By looking at which Hox genes are present in many different animals it is possible to track their evolution. The number ofHox genes has actually expanded during animal evolution. Jellyfish and other cnidaria have only two Hox genes. Sometime after they split from the rest of the animals these genes duplicated – this means when the DNA was being copied in the sex cells of our ancestors mistakes were made, and instead of copying the Hox genes once they were copied twice. In fact the bilateria have at least seven Hox genes, meaning they were duplicated more than once.

When a Hox gene was duplicated, the functions of the two copies diverged and each evolved a special role in the development of the animal. However some sections of the gene remained the same – they were conserved – these allow us to see how the genes are related.

In different lineages the toolkit of Hox genes has evolved independently. For example in vertebrates the whole group has been duplicated twice and all we vertebrates have four copies of the Hox gene cluster, although some copies have been lost as they did not evolve any new functions. When this happens natural selection does not act to maintain the gene because it does not affect the animal's fitness. The gene is left to accumulate mistakes until it is no longer used. This has been seen in nematodes (a group of worm-like animals); their Hoxgene toolkit has been reduced, presumably because they evolved simpler body plans so that some of their Hox genes were no longer needed. 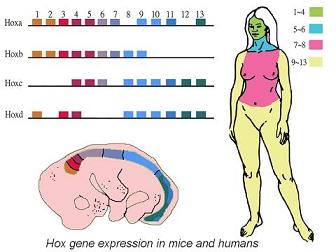 Conserved Functions – An Eye For An Eye

In some cases, the job of a Hox gene has been so important that natural selection has acted to preserve its function through hundreds of millions of years. Mutations that disturbed the gene’s function would have been removed from the population by natural selection because they had a negative affect on the animal’s survival or reproduction.

One example of a gene with a remarkably conserved function isPax6. Pax6 was first identified in humans because it can cause a disease called aniridia when it carries a mutation. Aniridia is a blindness disease caused be the underdevelopment of the retina. In mice Pax6 can cause blindness when disrupted, and it does the same in fruit flies. This suggested to scientists thatPax6 is involved in eye development in all three species.

To test this idea they took the Pax6 gene from a healthy mouse and put it into the offspring of blind flies. The new mouse Pax6gene rescued the flies’ eye development and they had normal, fly eyes. They repeated the experiment the opposite way round, putting a normal fly Pax6 gene into a blind mouse, and again the new copy of Pax6 rescued the eye development and the mouse had a normal, healthy mouse eye!

Scientists have now looked at Pax6 expression (turned on) in eyes across the animal kingdom. In as diverse groups as vertebrates, arthropods, annelids and molluscs Pax6 is expressed during eye development. In cnidaria Pax6 is even expressed in their photoreceptor cells – these are single cells used to detect light. This suggests that the basic eye evolved only once early in animal evolution and that Pax6 had a key role in its development. So key in fact that through hundreds of millions of years its role has been maintained despite the diversity of animal eyes expanding greatly.

Whilst some Hox genes do the same job across all animals, others have evolved differing jobs. This often happens after a duplication event. Having two copies of a gene can relax the strength of natural selection acting to preserve the gene, freeing it up to potentially evolve new functions. For example the fruit fly gene called Zen lost its function as a Hox gene and now plays a role in determining tissue types in the developing embryo. It has also duplicated more recently, one copy evolved another new function. It’s now called Bicoid and its new function is in determining the head-tail axis of the body.

The expansion of the Hox gene groups and the evolution of new functions for the genes enabled animals to become more complex, and allowed different segments of animals to diversify and evolve special functions. The way in which these genes are controlled can also explain the diversity of animal forms within closely related groups. For example, all vertebrates have a similar toolkit of Hox genes yet clearly the body plan of a bird differs from that of a monkey. This diversity is produced by evolutionary changes in the timing ofHox gene expression, and in the way different combinations ofHox genes are used together. Just like a light engineer using different combinations and intensities of a few primary colours to create a whole range of different effects.

At Cambridge, Prof. Michael Akam has been conducting research into the function and evolution of Hox genes in arthropods for 20 years. He works to understand how the same sets of genes can produce the diverse range of arthropod body plans (think of a centipede compared to a fly!). You can find out more about his research here.

Endless Forms Most Beautiful
by Sean B. Carroll, Quercus: 2007

The Language of the Genes
by Steve Jones, Happer Collins: 1993