Perhaps somewhat surprisingly, Darwin was never really a model student and he didn’t particularly enjoy his university studies, either at Edinburgh or Cambridge. At Edinburgh he spent more time studying sponges than medicine, and at Cambridge more time collecting beetles than reading theology. However the scientists he met at these institutions were to have a great and lasting influence on Darwin’s life. 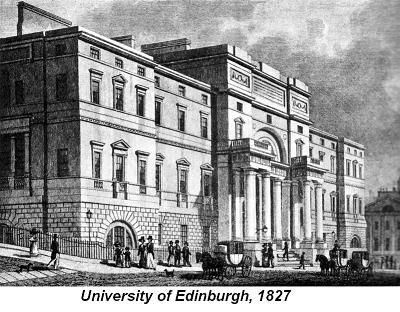 In October 1825 Charles was sent with his brother to Edinburgh University to study medicine; his father planned for both his sons to become physicians like himself. Charles and his brother lived at 11 Lothian Street, a few minutes from the University. The brothers enjoyed exploring the bustling city and dining with friends of their father.

However, Darwin did not enjoy the study of medicine. This is apparent from some of the letters he wrote home; ‘I attend Munro on Anatomy— I dislike him & his Lectures so much that I cannot speak with decency about them’. He also did not like surgery and hated the sight of blood— he once left, unable to watch, during an operation on a child at the Royal Infirmary. However, there were aspects of his life and study at Edinburgh that he enjoyed. He liked Thomas Hope’s theatrical chemistry classes and later Robert Jameson’s lectures on zoology and geology. The field trips in Jameson’s course taught Darwin to read strata sequences, which was important training for later in his life. He also occupied himself with coastal walks and bird stuffing classes, taught by the freed slave John Edmonstone.

On returning for his second year at Edinburgh, Darwin’s enthusiasm for his studies had dwindled even more; so much so that he didn’t even join the library that year. However, he joined many student societies, including the Plinian Society (a science club that studied the world from a natural view point as opposed to a supernatural one) and he was later on the society’s council. He listened to talks on various topics, including classification, cuckoos, and local sightings of rare plants. He also spoke himself— his first speech was on 27th March 1827 about the marine biology of the Firth of Forth.

Also during his second year, Darwin became friends with the Zoology Professor, Robert Grant. He was Darwin’s most important mentor at Edinburgh. Grant was a sponge expert and he and Darwin often went on long walks at the Firth of Forth, discussing marine biology and collecting samples. Grant taught Darwin about making observations and dissecting specimens. Darwin’s observations during this time led to his first scientific discovery, at the age of only 18! His discovery was about the ability of the sea mat Flustra larvae to swim by the means of cilia and also the presence of leech eggs in old oyster shells. It was these findings that he presented when he first spoke at the Plinian Society in March 1827. 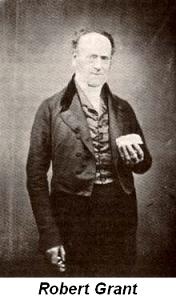 During this period, Grant also talked to Darwin about evolutionary ideas, especially those of Lamark. They discussed the view that all animals showed a ‘unity of plan’, sharing similar organs that were only different in complexity. They considered the identical bones of a bird’s wing, man’s hand and bear’s paw. Grant told Darwin about his own belief - that the common origin of the plant and animal kingdoms lay just below the simplest algae and polyps. This became a very important starting point for Darwin’s own propositions later in life.

All did not end well in Edinburgh. Due to being homesick and hating medicine, Darwin left Edinburgh in April 1827 without a degree. His father was worried about Darwin’s future and thus decided that Charles should have a clerical career. Before he could be ordained he needed to get a degree from an English university and so he went to Cambridge.

Darwin was admitted to Christ’s College, Cambridge on 15th October, 1827. However, his Greek needed to be improved, so he had home tutoring for a while and didn’t move to Cambridge until January 1828.

In terms of his studies, Darwin had doubts about his faith and again, was never completely committed to his degree. However, whilst at Cambridge he developed a strong interest as an amateur naturalist. He became friends with his cousin William Darwin Fox, who was also at studying at Christ's. Darwin began enthusiastically beetle collecting at the local fens with Fox and other students. He spent quite a lot of his spare time doing this and he had a special cabinet built for him to keep his collection in. His name appeared in J. F. Stephen’s Illustrations of British Entomology when some of his insect capture records were published— he was delighted by this. Darwin recalls one eventful beetle expedition in his Autobiography, which gives us a feel for the passion with which he collected: 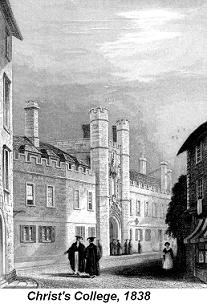 ‘one day, on tearing off some old bark, I saw two rare beetles and seized one in each hand; then I saw a third and new kind, which I could not bear to lose, so that I popped the one which I held in my right hand into my mouth. Alas it ejected some intensely acrid fluid, which burnt my tongue so that I was forced to spit the beetle out, which was lost, as well as the third one.’

Darwin attended soirees held by the botany professor, Revd J. S. Henslow, having been introduced to them by Fox. These were attended by other reverend professors, such as the geologist Adam Sedgwick, and the conversation inspired Darwin to develop himself as a naturalist. Yet, Darwin was still not focused on his studies and in the summer of 1828 he admitted to a friend that he felt he was not committed enough to his faith to enter the church. However, when he had his first major exam in March 1930, he passed.

Over time, Darwin developed a friendship with Professor Henslow. They would walk together and Henslow invited Darwin to attend his botany field trips and lectures, which he did enthusiastically. Henslow was an extremely important influence on Darwin, preparing him for a life in science. He was very knowledgeable and Darwin learnt a lot about plants, the properties of life and the differences between plants and animals. 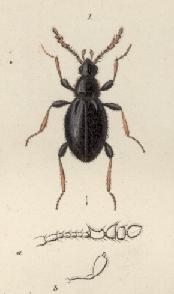 Darwin took his final exams for his degree in January 1831 and in the results he was ranked 10th out of 178! He stayed in Cambridge for the time being and continued to spend time with Henslow. He enjoyed this, writing to his friend Fox and telling him he expected ‘to spend a very pleasant spring term: walking & botanizing with Henslow’. In letters to Fox he also said of Henslow ‘whom I do not know whether I love or respect most’. During this time, Darwin was inspired to further his scientific career through reading various philosophy books, including Paley’s Natural Theology trilogy, which argued for a designer God. Darwin planned an expedition to Tenerife with some friends, writing to Fox and telling him of this: ‘I talk, think, & dream of a scheme I have almost hatched of going to the Canary Islands — I have long had a wish of seeing Tropical scenery & vegetation’. To prepare for his trip he went to Sedgwick’s geology lectures and in the summer went to north Wales with Sedgwick for a two week field trip. Sedgwick developed Darwin’s expertise in field geology and discussed the most prominent geological issues of the time with him.

When Darwin returned home from north Wales he found a letter from Henslow offering him a voyage on a ship, which had a two year trip around the world planned. In his letter Henslow said ‘I shall hope to see you shortly fully expecting that you will eagerly catch at the offer which is likely to be made you of a trip to Terra del Fuego & home by the East Indies’. He told Darwin not to fear about his disqualifications and assured him that he thought he was ‘the very man they were in search of’.

When Darwin first arrived at Christ’s College all the rooms were full so he lived above Bacon the tobacconist’s in Sidney Street. Today, this is where Boots the chemist is and there is a blue plaque under the first floor window to mark the site. In November 1828 he moved into a College set of rooms ‘in old court, middle stair-case, on right-hand on going into court, up one flight, right-hand door & capital rooms they were.’

After going on the five year Beagle voyage, Darwin came back to Cambridge for three months to sort out his specimens. During this time he lived in Fitzwilliam Street—a stone plaque marks the house. He often came to college, dining with the fellows and sharing tales of his adventures. His name appears frequently in the Combination Room wine book!

In Christ’s College today there is a large bronze bust of Darwin in the portico in the College grounds. The bust was made by the sculptor William Couper for the New York Academy of Sciences and it was presented to the College in 1909 during celebrations of the centenary of Darwin’s birth and the fiftieth anniversary of the publication of On The Origin of Species. In the College Hall there is portrait of Darwin, painted by Walter William Ouless, and he is also pictured in a glass panel in the Hall’s south window. To mark his 200th birthday a special garden has been created in New Court as the location for a new bronze statue showing Darwin in his twenties. The statue was created by sculptor Anthony Smith.