When one species looks very similar to another we say they mimic one another. You’ll be familiar with some common mimics, for example many bee, wasp and hoverfly species mimic each other all having yellow and black bands. Other creatures mimic inanimate objects like twigs and bird poop. Some are such successful mimics that people can find their evolution difficult to understand, surely the intermediates wouldn’t be good enough mimics and would be eaten? Or, as the evolutionary biologist Stephen Jay Gould put it: ‘what’s the point in looking 5% like a turd?’ Here we discuss a few examples of mimicry; including mimicry in tropical butterflies and cuckoos, and discuss how mimicry can evolve. 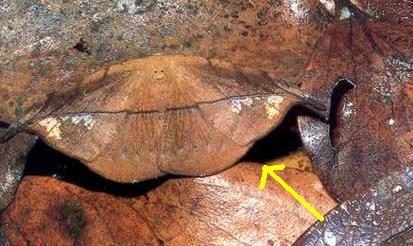 Mimicry can take several forms. Many cases of mimicry involve organisms which have evolved to look like inanimate objects. In this case, mimicry is a form of camouflage and the evolutionary advantage may be an increased ability to escape detection. For example the Camo moth looks like a dead leaf and of course stick insects resemble sticks. In some cases mimicry is used by predators to help them ambush their prey. Praying mantids are famous for this, one of the best examples are the flower mantids. We’ll see another example of escaping detection when we discuss cuckoos.

Many insects have evolved defence mechanisms against predators which make them distasteful or even toxic to eat. This type of defence is only useful if the predator knows in advance not to try and eat the distasteful species. Natural selection has therefore favoured the evolution of bright, warning colouration. Predators learn to associate distastefulness with the colour pattern and avoid eating things that have that pattern.

Because predators have to learn this association, many distasteful individuals are still killed by naïve predators. Many distasteful species which occur in the same habitats have therefore evolved similar colour patterns, which is called Müllerian mimicry. The yellow and black stripes common to bees and wasps give one example. The selective advantage favouring the evolution of this sort of mimicry comes from the predator's having to learn only a single colour pattern, which it does more quickly through encountering a greater number of distasteful prey all with the same colour pattern.

In some cases non-toxic species have taken advantage of Müllerian mimicry. Hoverflies for example are not toxic or distasteful; they don’t invest any energy in maintaining this expensive defence mechanism. Instead many species have evolved yellow and black bands so they mimic wasps and bees. Their predators will associate the hoverfly colour pattern with the horrible taste of truly toxic species and so avoid them, even though they are perfectly edible. This is called Batesian mimicry. Batesian mimicry can disrupt the stability of Müllerian mimics as predators no longer learn to associate the colour pattern with the distastefulness if the Batesian mimic becomes too common. When this happens selection drives the evolution of new colour patterns in the truly toxic species.

Better 5% Turd Than No Turd At All.

Mimics and the species they are trying to fool are in an arms race. In the case of the Camo moth it is under selection to avoid being spotted by its predators, but its predators are under selection to be able to spot the Camo moth. Any Camo moth that doesn’t look quite enough like a leaf will be spotted and eaten. The same goes the caterpillars of Eastern tiger swallowtail butterflies, which mimic bird droppings. So how has this mimicry evolved when surely intermediates are easy prey?

The key is that evolution takes small steps over time. The ancestral Eastern tiger swallowtail caterpillar probably looked nothing like a bird turd, and its predators probably completely ignored bird turd as a source of food. In this population any mutation that occurred which made one caterpillar look 2% more turd-like than the others would give that caterpillar a greater chance of survival, as predators would be a little more likely to discount it as a food source. That caterpillar would grow up, reproduce, its offspring would look 2% like a turd and the cycle repeats. Eventually the 2% turd mutation would spread throughout the population. As it becomes more common there would be selective pressure on the predator to identify things that look slightly poo-like as potential food sources. This means that if a second mutation occurred which made the caterpillar look 5% like a turd it would then spread in the same way. Selection would then favour birds able to identify these caterpillars. This could then repeat until we end up with caterpillars that look almost 100% like a bird poo and predators that can tell the difference between a 99% bird poo-like caterpillar and a real bird poo.

The main point is that intermediates occurring in modern populations are easy prey. But the intermediates that occurred during the evolution of this trait were competing against other intermediates, and against predators which also had intermediate abilities to spot their prey.

Heliconius & The Many Mimics

This colour pattern mimicry is also accompanied by convergence in the habits of the co-mimics. Races of each species involved in the mimicry ring have more similar ecologies than non-mimetic races. This suggests they have not only evolved to look similar, but also to behave in similar ways and occupy similar habitats. All of these factors work together to increase the rate at which predators learn not to target these butterflies as prey!

Dr. Chris Jiggins, who works in the Cambridge Zoology Department, studies the ecology of these butterflies to further understand how populations and species evolve. He’s also working to dissect the genetic basis of the different colour patterns found in races of several Heliconius species. Amazingly the diversity of colour patterns seen within a species seems to be controlled by only a handful of genes, even more remarkably the genes which control patterning in different species locate to the same region of the genome! This suggests the pattern diversity of each species may be controlled in a similar way. You can read more about his research here and here. And more about Heliconius in general here.

Another Cambridge Zoologist, Prof. Nick Davies, studies a different sort of mimicry; Prof. Davies studies Cuckoo birds. Cuckoos are famous for their breeding behaviours. A female cuckoo lays its egg in the nest of a completely different species of bird. The cuckoos found in the Cambridge Fens lay their eggs in Reed Warbler nests. They do this because they get away with not having to spend lots of energy raising their chicks, instead they can lay many eggs and the host birds will raise the offspring for them.

Reed Warblers lay a few eggs at a time; when they’re not looking a female cuckoo sweeps down and in a few seconds picks up a Warble egg, lays one of her own and flies off before being noticed. When the cuckoo chick hatches it pushes any other eggs, or any other chicks (!) out of the nest. The cuckoo chick is then fed by the warbler parents even though it looks very different and within a few weeks is twice the size of its foster parents!

How they got away with this has been a great puzzle; surely the host birds should kick out the imposter and stop it from killing their own offspring? Prof. Davies performed a series of clever experiments to figure out how cuckoos do it. The answer comes from their ability to mimic their host. First of all the egg the cuckoo lays is very similar to the host species eggs, it’s about the same size and has a similar colour and pattern. If it’s not similar enough the warbler will notice something’s up and peck at the strange looking egg until it's cracked open.

A second bout of mimicry comes once the chick has hatched. The cuckoo chick mimics the calls made by a whole brood of warbler chicks! This stimulates parental behaviour in the warblers so they keep feeding the giant chick, at great energetic cost to themselves.

The cuckoo and host are in an arms race, the cuckoo evolves more and more similar eggs and calls, and the host gets better and better at detecting imposters.

Mimicry isn’t restricted to animals, it’s found in many different types of plants too. Among the nicest examples of mimicry in plants are the flowers of the Bee Orchid. Most plants rope in insects to help pollinate them by offering some sort of tasty treat. Bee Orchids do this too, but in this case the tasty treat isn’t food. Bee Orchid flowers have evolved to mimic female bees, they con male bees into thinking they’re getting a different sort of ‘tasty treat’. Some orchids even release sex hormones to attract males. 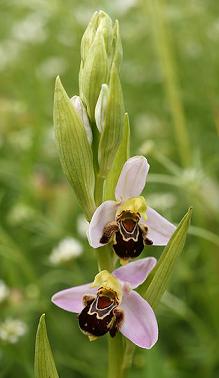 When the male tries to mate with the fake bee it picks up drops of pollen, inadvertently helping fertilise the orchids. Mimicry in orchid flowers can be pretty impressive but can be explained in the same way as mimicry in insects. Initially any mutation that caught the eye of a bee would be favoured as the flower would have increased chances of being fertilised and spreading its pollen. At the same time if a bee wastes time and energy mating with a flower, selection will favour bees which ignore the flirtatious plants. This in turn favours the evolution of increasingly bee-like flowers – another example of an arms race. After many generations, the excellent mimicry seen today will evolve.

Endless Forms Most Beautiful
by Sean B. Carroll, Quercus: 2007