All of us have experienced an illness caused by a virus at sometime in our life, from flu to verrucas to much worse. Understanding how these viruses evolve is key if we are to be able to treat them. Recent research in this field has led to major advances in the treatment of diseases that kill hundreds of thousands of people every year, such as Human papillomavirus (HPV), influenza and HIV.

A Virologists Guide To Pulling Sickies?

Each year UK companies lose around £13 billion because employees are absent due to sick leave. Clearly some of these days will be people who just want a day off but don’t want to use up their annual leave. To do this reliably people have to be consistent and this involves knowing something about your excuse. For example, claiming a close relative has died might be fine twice, but anything upwards of that will raise eyebrows. Similarly everyone is an amateur virologist when it comes to pulling sickies. The annual phone call claiming to have flu is a definite favorite but no-one decides to kick it up a notch by claiming to have mumps every year. This is because everyone knows you don’t get repeated bouts of mumps year on year since being infected gives you immunity; in any case, most people are vaccinated against mumps by the MMR vaccine. Why is it though that although there is a flu vaccine every year not everyone is vaccinated and protected from flu for their whole life? Come to think of it, why isn’t there a vaccine for HIV at all? To understand the answer to these questions it is first necessary to look at the immune system and to understand a little about how vaccines work.

The immune system works by recognizing things which are likely to be infections and to cause harm. Once something harmful has been recognized a targeted response is generated, highly specific to the invading organism, and this involves the generation of a huge number of effector cells. These can work by killing infected cells or they can produce antibodies which render the pathogen ineffective. Once the threat has been dealt with most of these cells will die, however some remain forming a memory pool which wait for the day when the same threat rears its ugly head again so they can squash it more rapidly. This is why if you have been ill once, the response to that pathogen is much more rapid the next time, leading to there hardly even being any symptoms the second time around.

A vaccine is something which fools the immune system into thinking it is being attacked by a pathogen and causes it to mount an immune response against something administered artificially. This creates the memory pool mentioned earlier and so when the pathogen is encountered for real the rapid immune response is sufficient to kill it rapidly and prevent an infection and illness. Over time the number of cells in the memory pool specific a particular pathogen decreases, as more and more new infections are seen, which is why a booster vaccine is sometimes needed, foe example against tetanus, to shore up the numbers.
The whole system sounds simple and effective, but why then isn’t flu a thing of the past? Why did the HPV vaccine only arrive a couple of years ago? And why hasn’t HIV been stopped? Most importantly what does it have to do with Darwin?

To answer these questions viruses have to be seen as organisms in their own right. They aren’t static but are constantly evolving, moving the goal posts and evading our immune system. Over time mutations will occur as the virus replicates, just like in any other organism, and this will lead to diversity within the population. Most of these mutations will produce less fit viruses but occasionally one or more will prove to be beneficial. 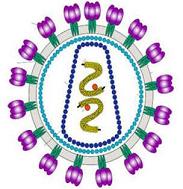 One example of a mutation beneficial to a virus is if it alters the structures which are recognized by the immune system. This can happen because the immune system only recognizes small sections of a pathogen; these recognition motifs are called epitopes. If an epitope which the immune system recognizes is altered then when this new altered virus infects someone they will have to mount a whole new response from scratch and, as before, this is too slow to prevent the infection from taking hold. The flu virus mutates rapidly, producing new strains each year which the population isn’t completely immune to, and as such people can be reinfected. For this reason, year on year new flu vaccines have to be made to combat the new strain. HIV changes so rapidly that there are many circulating strains making an effective vaccine impossible to build. The selective pressure a vaccine would provide, by producing so many immune potential hosts, would exacerbate this problem as it would select for any rare variants, rapidly making itself obsolete.

One reason HIV changes so rapidly is because its genome is encoded by RNA and is copied first into DNA and then back to RNA to make more virus. The copying of RNA to make DNA is extremely error-prone which introduces more mutations than occur in many other viruses. As such many viruses which replicate in this way are extremely difficult to vaccinate against. One reasons why some viruses are easier to treat arises if the epitope recognized by the immune system happens to be crucial to the life cycle of the virus. For example, if the immune system recognizes part of an enzyme which is crucial for the replication of the viral genome then a mutation in this epitope will instantly prevent the virus from replicating and passing on the mutation.

It’s not all doom and gloom though. Although viruses are mutating and evading the memory responses our immune systems erect there is some hope on the horizon. Evolutionarily it is not in a virus’ best interest to kill its host. If someone catches influenza and dies within a day they are unlikely to pass it on to many people. If the person survives for several years without clearing the virus it can be passed on to many more people. This can be seen best by looking at myxomatosis and rabbits in Australia. The virus was carried by rabbits in Europe but had never been present in Australia. As a result when it was introduced none of the rabbits were immune and the illness ripped through the population. In fact it was such a strong virus that it killed many of the rabbits it infected. Over time rabbits were selected to be more resistant to the virus but viruses which were less virulent were also selected as their hosts survived longer to infect more rabbits. This is expected with most viruses; for example, HIV being a relatively new virus to humans is causing huge problems but already in areas of high incidence people are being born who are naturally resistant to HIV infection. Not only this but the closely related simian immunodeficiency virus (SIV) infects primates but is largely asymptomatic, showing a situation where these two organisms are coexisting peacefully.

So viruses too are evolving. Some, like HIV, are evolving so rapidly that evolution can even be observed as it occurs within a single person. This can inform vaccine design and how we see the future of a virus’ development. This is only part of the story though; the wholesale exchange of large chunks of genetic material between different strains of virus can lead to massive evolutionary jumps producing problems such as may be seen with bird flu in the near future. All of these things need to be understood if we are to even hope of combating these sometimes devastating infections, and an understanding of evolution and selection pressure plays a large part in this.

As mentioned in this piece, there is a vaccine against flu, but each year a new vaccine has to be made since last year’s becomes ineffective. So how do you make this vaccine? We never know what the next flu vaccine will be like, or how our immune system will respond to it. But getting the vaccine right is vitally important, otherwise perhaps millions of lives are at increased risk – flu is a big, global killer, especially in the elderly or people who are already sick. Scientists therefore have to predict what strain of the virus will spread in the following year! This may seem like guess work, but researchers at the University of Cambridge, led by Prof Derek Smith have developed a method of getting this prediction as accurate as possible.

Prof Smith and his colleagues have developed a method called ‘Antigenic Cartography’. They collect information about the characteristics of a flu virus over many years, and update their database with the spread of each new flu virus. They use this to produce maps which describe the evolution of the virus. This can be used to assess what strain of the virus is likely to pop up next and to have the most effective vaccines ready in advance. The method is so successful that the World Health Organisation uses it to make their decisions on choosing flu vaccines. You can read more about their research here.