How Do We Know?

Darwin’s ideas have been about for 150 years, and they haven’t always been popular. At first scientists played around with several different ideas. But scientists are picky people who love testing ideas and finding lots of different types of evidence to help explain things. After 150 years of hard work, scientists are now sure Darwin was right and that life has evolved by natural selection. So what's the evidence?

A Blast From The Past!

Fossils are the remains of animals and plants which died and were buried. Over millions of years they can be turned to rock. The earth’s crust doesn’t stay still. It consists of lots of slabs of rock, called ‘plates’, which float on a layer of molten rock – just like ice on a lake (except hot!). These plates move very slowly around the globe, they can also be lifted up or pushed down if they collide with each other.

If a fossil is in a piece of rock being lifted up, and if we are very lucky, it might appear on the surface and some fortunate fellow might find it. The fossil record is quite incomplete; it doesn’t record every species that has ever lived. You can imagine why with all that molten rock and huge pressure!

But we do have lots of evidence to support Darwin’s ideas. We have fossils of very simple life forms that date back to 3.5 billion years ago! That’s 3,500,000,000! As you go through the fossil record, towards the present day, more groups appear; plants, trees, flowers, animals, fish, amphibians, reptiles, mammals all pop up.

In some cases we have been very lucky and the fossil record has preserved an animal or plant that links two different groups. These ‘intermediates’ show evolution caught in the act! One good example is the evolution of four legged, land living animals from fish. Creatures like Tiktaalik and Ichthyostega look a lot like a fish with flimsy legs, and they are actually the link between fish and amphibians! Animals like these lived at the waters edge about 375 million years ago, first propping themselves up on their front legs to gulp in air, then eventually evolving limbs which they could use to walk.

Another example is the evolution of birds from none other than dinosaurs! Dinosaurs are a huge group of extinct reptiles that ranged from the very small to the absolutely gigantic. Some of the smaller dinosaurs are thought to have evolved feathers from scale-like projections. These were used probably either to keep them warm or as sexual displays, like peacocks. Some of these feathered dinos began to run and use their front limbs to lift them off the ground! Eventually this group evolved into birds. Birds are in fact dinosaurs and we’re surrounded by them! If you ever see a chicken ready for roasting can you see the similarity between its body shape and that of T-rex? One of the most famous dino-birds is Archaeopteryx which lived about 150 million years ago; it had a dinosaur’s tail, neck and teeth, but front limbs that look like wings and were covered in feathers! 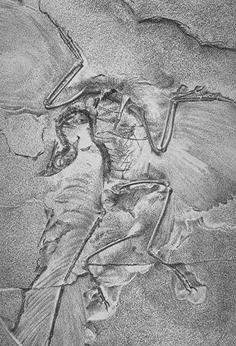 A third example comes from our own evolution! Human’s nearest living relative are the chimpanzees, which we split from about 5-7 million years ago. We have a very good fossil record of the in between stages since then. Scientists have found over 20 species of human-like primates called hominins. They clearly show how our brains used to be quite similar in size to a chimpanzee's, but as you look at more recent fossil hominins the brain gets bigger and bigger. In fact humans don’t have the biggest brain of any hominin; that honour belongs to Neanderthal man (Homo neanderthalensis) which lived as recently as 25-30,000 years ago.

Another line of evidence to support evolution is DNA. DNA is a molecule which is in almost every cell in your body. It carries the instructions needed to build an organism, a bit like building blue prints or an instruction manual, and is passed on from generation to generation during reproduction. All living things on our planet use DNA as their instruction manual which is a clue in itself! That fact suggests all life is related, just as we expect from Darwin’s theory.

Scientists have developed ways of taking DNA from an animal or plant cell and ‘sequencing’ or reading it. When you do this you can compare the DNA of lots of different living creatures. Amazingly, you find some of the same chunks of DNA in bacteria as in humans. When you look at more closely related organisms you can see their DNA is increasingly similar. Famously the DNA sequences of humans and chimpanzees are about 97% identical.

Biologists have even been able to cut out the stretch of DNA that controls one bit of one animal and put it into a different one to see if it does the same job. For example, a bit of DNA called Pax6 controls how eyes are formed in mammals like mice. It’s also thought to do the same job in flies. Amazingly, when biologists cut out the Pax6 of a mouse and put it into a fly, it worked perfectly to produce a normal fly eye!

DNA and fossils give us clues about the past, but evolution still happens! It’s ongoing and will keep going for as long as life exists and we can even see it happening! One of the best examples comes from a bunch of birds on the Galapagos Islands known as Darwin’s Finches because they helped to make Darwin think about evolution when he saw them during his round the world trip. 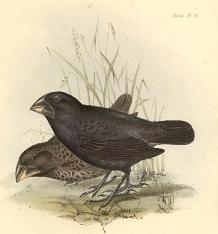 Researchers on the Galapagos Islands have been watching these birds very carefully since the 1970s. Each year they capture every single bird on the island called Daphne, and measure all their bits and bobs. They pay particular attention to their beaks because these birds feed on seeds that fall on the ground and have hard outer cases which have to be cracked open to get at the good bit inside.

The scientists watched the birds during a drought, when seeds got very scarce. After a year only the toughest seeds were left, the ones no bird bothered to try and crack before. Many birds started to starve and die. The ones that survived had the biggest beaks and were able to crack the tougher nuts. They got enough food to mate, and their offspring inherited their big beaks. After the drought ended the researchers compared the average beak sizes before and after. The birds alive after the drought had beaks that were 1-2mm bigger than those that had died. That might seem small but it was the difference between life and death! And 1mm is a big increase for a beak that was only 3mm thick to begin with!

We have lots of examples like this now where we can see, over the course of a few years, evolution happening right in front of our eyes!