This case study focuses on a group of extinct early arthropods called trilobites. Trilobites were a hugely successful group and they are the most diverse group recorded in the fossil record, but the last fossil trilobites are found in rocks which are 250 million years old. Trilobites have become one of the most studied groups of extinct animals and their evolution is well documented in the fossil record. Here they are used as an example of how paleobiologists can infer the ecologies of extinct organisms, and as yet more evidence for evolution.

What Is A Trilobite?

Trilobites were a group of early arthropods, the phylum now represented by the likes of spiders, centipedes, insects, crustaceans, and probably the trilobite’s closest living relatives, horseshoe crabs. About 20,000 species have been recorded in the fossil record, with new species being discovered each year. They first appeared about 550 million years ago, probably evolving from the arthropod-like Precambrian groups like Spriggina which is recorded in the Burgess shale. Some species like Bynumina liraewere as small as one millimetre, whilst others were a couple of feet long; Isotelus rex holds the record at 72cm long.

All trilobites share a basic body plan: they have a head section called the cephalon, a tail section called the pygidium, and the main body section called the thorax. Down the centre of the body runs the axial lobe which has a pleural lobe either side which look a bit like ribs or like a woodlouse. They had a hard exoskeleton made of calcite and chitin, sensory pits and compound eyes. This basic body plan was modified greatly during their evolution, with the relative size and shape of the cephalon, pygidium and thorax being highly variable. Some trilobites had impressive spines and tridents protruding from their head like antlers! The structure of the eyes also evolved differently along different lineages, with different shapes and numbers of lenses. Some lineages evolved eyes on stalks, whilst others lost their eyes all together.

All trilobites were marine, but the seas they inhabited were very different from those of today, for example there were none of the jawed fish or crustaceans which now dominate marine environments. Trilobites were one of the most successful groups during the Cambrian and Ordovician periods (550-450 million years ago) and evolved to occupy numerous different habitats. Paleobiologists can use evidence from the fossil record to piece together how different species lived.

Once source of evidence can be found in trace fossils. Trace fossils are the tracks and imprints left by animals in sediment which are then filled in and fossilised. Trace fossils are sometimes found in the same slab of rock as a fossil organism allowing the two to be linked. The sorts of trace fossils linked to trilobites suggest many were bottom dwellers, scuttling along the seabed.

The adaptations found in some trilobites however suggest they were able to swim. Opipeuterella was a group of trilobites which had very big eyes and narrow bodies and their cephalon and pygidium are quite small compared to the thorax. Trilobite experts think that these were adaptations to allow Opipeuterellato have more flexible body movements so they could swim through the water, and that the big eyes helped with looking out for predators from all directions.

Other groups show adaptations for burrowing. Cryptolithus was a group with no eyes at all, but with a very large cephalon and small thorax. They also had long spines coming from the cephalon. It’s thought that the large head was used like a shovel to dig down in the sediment to find food, and that the long spines helped prop the animal up so it didn’t get stuck in the mud.

Trilobite fossils are quite common in some rocks, perhaps because many lived on the sea floor where fossilisation is more likely due to the gentle conditions. Because they are so common trilobites have become a key study system for looking at both microevolution (evolution within a species) and macroevolution (evolution between species) in the fossil record. 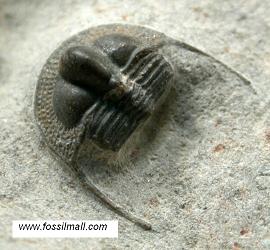 One example of microevolution in trilobites comes from Onnia superb; this superbly named species can be found in successive layers of sedimentary rock from the Ordivician period around Western England. O. superb had a number of pits around its cephalon which were probably either sensory, detecting vibrations in the sand, or had roles in filter feeding. The number of these pits is variable in individuals found in the same lump of rock. By counting the number of pits each fossil shows through successive layers of rock, paleobiologists are effectively measuring how this trait changed through successive generations of a population. They find the individuals in younger rocks have significantly more pits than in older layers; that’s evolution, a change in a species’ trait through time.

Another example comes from work done by Peter Sheldon, who did his Ph.D. at Cambridge. Sheldon studied trilobites found in rocks in Wales, measuring almost 3,500 trilobites across 7 layers of rock, studying 8 different types of trilobites. He was specifically counting the number of pygidial ribs the trilobites in each layer had, to see if they changed through time. He found that in all eight types the number of ribs increased through time, a population in one layer usually had a 1 or 2 ribs fewer than the same type in the layer above it, but 1 or 2 more than in the layer below. Comparing the trilobites of each type from the lowest and uppermost layers Sheldon found that they were sufficiently distinct to be separate species, but they were all connected by a series of intermediates.

Despite being incredibly successful for almost 300 million years the last of the trilobites went extinct about 250 million years ago during the Permian/Triassic mass extinction. This is one of the biggest mass extinctions ever to have happened on earth, over 90% of species died out. It’s not absolutely clear what caused this mass extinction but some combination of an asteroid impact, massive volcanism and the eruption of toxic gases from the earth’s crust seem likely. 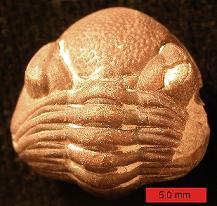 The truth is that trilobites were becoming rare even before the mass extinction. By that time only five genera persisted. Trilobites had suffered as new groups of animals evolved, jawed fish and sharks were probably a particular problem. Many of the later species of trilobites show adaptations to protect themselves against predators including the ability to curl up in a little ball. Trilobites were being outcompeted before finally being killed off at the end of the Permian.

Well preserved groups like trilobites make ideal study systems for biologists interested in the evolution of organisms. One of the best known trilobite experts is Dr. Richard Fortey, who studied geology at Cambridge and is now the senior palaeontologist at the Natural History Museum in London. If you’d like to know more about trilobites he has written a book about them: Trilobite! Eyewitness to evolution (2000).

Dr. Ken McNamara who works in the Earth Sciences Department in Cambridge takes advantage of the excellent trilobite fossil record to examine the evolution of developmental change.

His colleague Dr. Liz Harper takes advantage of another two groups of marine animals which have good fossil records, bivalves and brachiopods. Bivalves and brachiopods both date back to the Cambrian period and occupy similar habitats, both having a valved shell and being sessile filter feeders. The brachiopods appeared first, but when bivalves evolved they came to dominate perhaps because they have a more efficient mechanism to open their valves. Both groups diversified greatly, but by tracing similarities and shared traits through the fossil record the relatedness of different groups can be worked out and patterns of evolution can be observed, just like we discussed for trilobites!

Find out more about trilobites here.

Evolution: What the Fossils Say and Why it Matters
by Donald Prothero, Columbia University Press: 2007