Darwin’s theory of natural selection is critical for the modern study of evolution. However, as important as its central idea is, The Origin of Species is not the 'bible' of evolution today, as understanding of many areas has progressed since Darwin’s day. One key advance was finding the solution to a problem Darwin unsuccessfully puzzled over; how does inheritance work? Well, scientists who lived after Darwin came up with the answers.

Darwin noted in On the Origin of Species that, at the time of writing, ‘the laws governing inheritance are for the most part unknown’. Mendel’s famous genetic experiments with pea plants had already begun in the 1850s, before Darwin published The Origin. However, Mendel's results were not published until 1866 and their significance was not fully understood even then. Most naturalists, including Darwin, believed that inheritance involved the blending of the characteristics of the mother and the father. When considering outwardly obvious characteristics such as skin or coat colour in animals, this theory generally appeared to work. 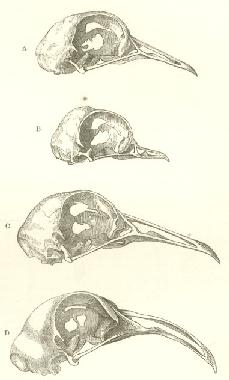 However, there were also many exceptions. For example, when Darwin wrote The Variation of Animals and Plants Under Domestication, he found that, in one curious case involving rabbits, ‘the offspring are said not to have blended colours, but to take after either parent’. If inheritance occurred by blending, there would be little variation for natural selection to act upon. For example, if one animal was a little taller than the others, this may be favoured by natural selection, but through breeding with its shorter kin, this adaptation would be lost.

Darwin eventually proposed an alternative theory of inheritance to address this problem, in The Variation, termed pangenesis. Darwin’s process of Pangenesis goes something like this: each organ in the body, throughout an individual’s life produces small particles called ‘gemmules’. These ‘gemmules’ contain information about the organ; how it is used or not used, it’s size, structure etc. When ‘gemmules’ were released from an organ, they travelled through the body to the sperm and eggs in the reproductive organs, where they stuck together. In this way the information could be passed on to the next generation, so explaining the heritability of variation.

Darwin’s writing on Pangenesis in places alludes to an awareness that the evidence was not all there to support his ideas, even that he may well be wrong. He refers to Pangenesis as his ‘provisional hypothesis’ and in the introduction to the chapter in which he outlines the theory states:

‘I am aware that my view is merely a provisional hypothesis or speculation; but until a better one be advanced, it may be serviceable by bringing together a multitude of facts which are at present left disconnected by any efficient cause. As Whewell, the historian of the inductive sciences remarks:- “Hypotheses may often be of service to science, when they involve a certain portion of incompleteness, and even error”.’

In a similar vein, in his autobiography he writes of his ‘much-abused’ theory that:

‘An unverified hypothesis is of little or no value; but if anyone should hereafter be led to make observations by which some such hypothesis could be established, I shall have done good service’.

One such hypothesis was established just a couple of years after Darwin’s death. In 1883 the great German biologist August Weismann proposed the “germ-plasm” theory of heredity. The germ-plasm theory states that an organism’s cells are divided into somatic cells (the cells that make up the body) and germ cells (cells that produce the gametes). His great insight was to see that the two do not exchange information – variation must be produced in the germ cells. Weisman firmly rejected the idea of heritability of acquired characteristics, which was central to the neo-Lamarkian evolutionary theories popular in the late 1800s. At this time natural selection was very unpopular and Weisman was one of the few supporters, and probably the keenest, of Darwin’s theory of natural selection. It is a nice twist therefore, that Weismann's germ-plasm theory dealt a death nail to one of Darwin’s other big ideas; Pangenesis. 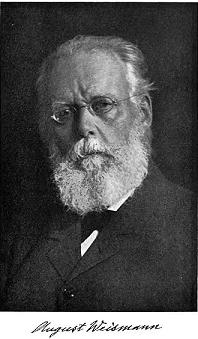 Additionally, in the early 1900s, Mendel’s work was studied again with renewed interest. His experiments suggested that characteristics do not blend in the way that scientists had thought, but rather that they are passed on as discrete factors (now known as genes), with some being dominant over others.

Initially, these new and rediscovered theories prompted disagreements in the scientific community, and they were believed to be contrary to Darwin’s theory of natural selection acting on small heritable changes. But ultimately these ideas were understood to be complementary: genes are the means through which information is inherited, and they are passed on through the germ cells. If an individual’s genes give it an advantage, it is more likely to survive and pass on those genes to its offspring. This combination of genetics and natural selection is termed the Modern Synthesis, and is the cornerstone of modern evolutionary understanding.