Symbiosis: No Man Is An Island

John Donne once wrote that no man is an island. Biology can go one better and can assert that no organism is an island either! Clearly no organism exists wholly by itself in isolation. One way that this can be illustrated is by food webs - the webs that show how different organisms in an ecosystem are interconnected by what they eat or are eaten by. This is, however, just one of the many ways in which organisms interact.

Predation is a particularly dramatic interaction but there are a whole host of less dramatic ways in which organisms affect one another. These interactions are massively important when considering evolution because they will help decide how ‘fit’ an organism is and thus if it will be selected for or against. These interactions can help drive evolution and are often causes of rapid change as a species competes, for example, with its predator. Because the interacting species will also be evolving, the behavior of these other species (known as biotic factors) can change more rapidly than other (abiotic) factors such as temperature.

Firstly organisms can interact in a very positive way in which both will benefit. An example of one of these mutualistic interactions is between the bacterium Vibrio fischeri and the oceanic squid Euprymna scolopes. The bacteria inhabit a special light organ in the squid and when they reach a sufficiently high density begin to produce light. In this way the nocturnal squid emits light and when it swims above predators it appears to be a reflection of the moon rather than producing a silhouette. Thus the bacteria gain a safe place to live and the squid is protected from predators. 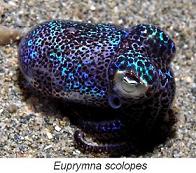 The interaction has dramatic effects on the two organisms with the bacteria dramatically changing their gene expression and morphology within the light organ and the squid possessing the specialized light organ. This is so beneficial to the squid that it even produces a mucoid substance to capture the bacteria from the water. Interaction like this can become extremely close and it is thought that a close interaction between certain bacteria and other larger cells may have led to the development of chloroplasts and mitochondria - two crucial organelles found within the cells of animals and plants today.

Not all symbiotic relationships are quite so positive. In some cases one species benefits while the other is relatively unaffected. Examples include orchids which live on trees and mites which live on certain insects. In this case the orchid or mite gains a place to live but the tree or host insect is unaffected. These relationships are however more complex than they may seem. Whilst it may seem completely neutral to one party it is unlikely that this is completely the case. Possessing large numbers of mites may hinder an insect’s flight. In contrast the presence of bacteria on human skin or in the gastrointestinal tract can actually protect the host from infection by other, potentially pathogenic, organisms. As the phrase goes, ‘it’s a dog eat dog world out there’ and many species will try to survive by taking advantage of others.

All of the interactions up until this point have seemed fairly innocuous but what if one organism benefits at the other’s expense? This is called parasitism and is the final kind of symbiotic interaction to be discussed. A parasite is an organism which tries to benefit at the expense of another organism, known as the host. Being a parasite is a hugely effective way of living, but being a host is rubbish! Parasites are evolving to get better at evading host defenses and hosts are evolving to be better at ridding themselves of parasites. As such an arms race develops!

Parasites clearly cause a huge amount of problems especially to human health. Malaria is one of the three diseases causing the most damage to human health worldwide currently and it has had a huge effect on human evolution. The same human mutations which cause diseases like sickle cell anaemia and other thalassemias produce some degree of protection to the host. This leads to survival throughout evolution of mutations which would otherwise be a disadvantage to the host, showing how host-parasite interactions are shaping evolution. These effects are mirrored in other organisms where costly and showy ornamentation like the peacock’s tail has been suggested to be indications that an individual is free from parasites as they could not support such a showy ornament if they were also suffering adverse reactions from parasites.

Even with these many categories it is still possible for interactions between organisms to be surprising in their complexity. Parasites are defined by the fact that they cause damage to the host, but organisms evolved in the context of parasitic infection and removing the parasite from the host can lead to unexpected consequences. One example of this is the link proposed between the lack of parasitic infection in the developed world and the prevalence of allergy. In areas of the world where parasitic infections are still the norm it is almost unheard of to find people suffering from anaphylactic reactions to allergens. However where people lack parasitic infections there is a prevalence of allergic reactions to everything from nuts to dust. The immune system evolved alongside parasites and these parasites provided a vital set of brakes on the immune system, modulating it or educating it by their presence. In their absence, therefore, the immune system is not functioning in the context in which it evolved. It has been shown in mice that experimental infection with tiny worms called schistosomes can prevent the development of diabetes. In fact Koichiro Fujita, an environmental parasitologist from Tokyo, has been hosting worms in his gut voluntarily and he claims it has kept him slim and has cleared up his hayfever.

So these close, long-term interactions have potentially led to the development of sex, to the very structure of the cells which make up all eukaryotic organisms and have produced an environment in which apparently detrimental characteristics have been selected. It is clear that the evolution of one species cannot be understood in isolation. Why doesn’t sickle cell anaemia get eradicated? Why does the peacock have a showy tail? Why is allergy on the rise? Answers come from an examination of these amazing symbiotic relationships. It is crucial not only to consider the abiotic conditions in which organisms evolved but also to remember that truly no man is an island.

Evolution by Association: A history of Symbiosis
by Jan Sapp, OUP: 1994