Many people know about Gregor Mendel and his work on peas which laid the foundation for modern genetics, but the public does not often associate Darwin with botany. They should: he published numerous articles on botanical subjects and six books. It was a botanist called John Stevens Henslow that first inspired Darwin, introduced him to the concept of variation and arranged his place on the Beagle. Plants were as important as animals in Darwin’s original theses on selection and variation in On the Origin of Species and The Variation of animals and plants under domestication.

After finishing The Origin and finally letting loose the full might of his ideas on the world Darwin’s next project was, somewhat surprisingly, work on fertilisation of orchids. Not the great, wide-sweeping science you’d expect from the great man perhaps? But it was! Darwin’s botanical works provided yet further evidence to support his theoretical work as well as uncovering facts that are remarkable in their own right.

In Victorian England collecting rare, exotic and beautiful Orchids was all the rage. After Darwin published The Origin one of the most widely used counter-arguments against natural selection was that it could not explain the finer details of life, like the delicate, complex flowers of orchids. Flowers in general, it was argued, were created by God for the pleasure of man.

Darwin of course was neither immune to the fashions of society nor to the lure of exotic flowers, and he had kept and admired Orchids himself. As his health suffered he would increasingly turn to experiments with plants to satisfy his curious mind, as these could be conducted from the safety of his own home in Downe, Kent. Darwin therefore began a series of experiments to work out how Orchids are fertilised and why they have such elaborate flowers. 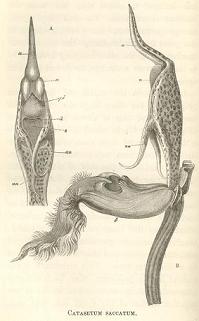 Darwin would cover some orchids with glass bells, others he left exposed. After flowering he would collect the seeds and try to germinate them, he found that only the orchids left exposed produced fertile seeds. He was able to pinpoint the important difference to the plants pollinia: structures, like little bags, full of pollen. These pollinia would disappear from the uncovered plants, but not the covered ones. Darwin used his network of collaborators across the world to collect facts about how these pollinia are distributed by insects. He found that many species of moths and butterflies have been found with pollinia on their proboscis, which is like a long tongue used to drink the flower’s nectar. 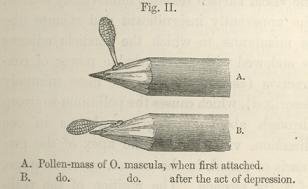 Further work demonstrated that each pollinia was positioned and shaped just right so that the butterflies and moths which most often visit that species pick them up. They then fly off to the next plant and deposit one set of pollinia, which fertilise the plant, and pick up another set. The flowers and pollinia of orchids were shaped by natural selection to attract and exploit insects to cross-fertilise different plants.

This work was published as On the Various Contrivances by which British and Foreign Orchids are Fertilised by Insects in 1862 and provided evidence of how natural selection can produce complex and beautiful products. It also confirmed to Darwin that plants and animals benefit by avoiding self-fertilisation; orchids went to great lengths to avoid it. Darwin thought this was important for his theory as it creates variation for natural selection to act on.

He later expanded on these ideas, again with plants, in two books The Effects of Cross and Self Fertilisation in the Vegetable Kingdom (1876) and Different Forms of Flowers on Plants of the Same Species (1877). These together provide more evidence that plants are adapted by selection to favour cross-fertilisation rather than self-fertilisation, and that the seeds of self-fertilised plants were generally less successful than those of cross-fertilised plants.

Darwin’s ill-health restricted him to a few hours of work a day, and largely stopped him leaving Down House. Plants therefore became the ideal subject as they are easy to watch and don’t move very quickly. But they did move and this intrigued Darwin who read a paper by Asa Gray about the movement of plant tendrils, and subsequently asked his friend to send him some seeds so he could see for himself. As with any subject Darwin studied, seeing one was never enough. Soon enough he had studied over 100 species of climbing plants, his study and greenhouse were cluttered with pots growing the things, and his family had been roped in to help, especially his son, Francis Darwin, who co-conducted some of his later work. 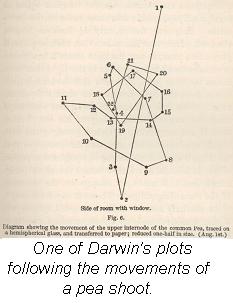 Plant tendrils are small projections which curl round objects, supporting the plants. The process seems very complex, and happens very slowly. To allow him to see how these tendrils move Darwin devised a clever but simple method whereby he plotted the position of tendrils on paper, then joined up the dots.

By comparing so many different species of climbing plants, Darwin was able to show that they were probably all descended from a early, simple form of climbing plant, which may have wrapped its stem, rather than specialised tendrils, around objects. This early adaptation had then been shaped by natural selection into a range of tendrils. Once again Darwin showed the seemingly complex could be reduced to a gradual evolution of complexity from a simpler form.

Darwin’s work on climbing plants was published in On the Movements and Habits of Climbing Plants (1865). This was followed up 15 years later with Darwin’s penultimate book; The Power of Movement in Plants (1880). In this book he argued that the simple movement of plants which occurs during growth has been shaped by natural selection to meet various needs in different plant groups. All these specialised movements were descended from one ancestral type of movement. By looking at how plants move and grow, it is possible to see similarities which give this evolutionary relationship away.

Another group of plants Darwin set his investigative gaze on was the insectivorous plants. These plants trap insects using a combination of sticky fluids and specialised structures, which close around a trapped insect. The insects die and are digested by the plant secreting a special acidic fluid. Nutrients are then taken up by the plant, just like animal digestion. 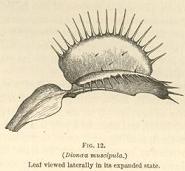 Darwin carried out a series of meticulous experiments to work out how this happened. He blew on the plants, prodded them with hair and fed them meat and glass to show that only the movement of an animal would stimulate the plant to close its trap. This also had to be in a specific part of the plant; any attempt to cause the plant to shut by stimulating another region had no effect. Darwin invoked natural selection to explain this; if the plant closed its trap at the wrong moment it would waste energy and would be less likely to catch useful pray. He showed that some plants which lack traps produce sticky fluids and sometimes trap insects but cannot digest them. This, he argued, may be the primitive state, which has been shaped by natural selection into diverse methods of trapping and digesting insects. Darwin’s results and conclusions were published in his 1875 book, Insectivorous Plants.

Darwin’s work on botanical subjects was scientifically important. He took complex traits, such as the flower of orchids, or the movements of climbing plants and insectivorous plants, and showed that his theories of natural selection and evolution through common descent could explain their existence. Complex traits can evolve slowly over time from more simple forms. By doing this he addressed some of his critics who failed to see the real power of his ideas.

They were also important in their own right and were well received by his fellow scientists. Asa Gray, a Harvard University botanist, Darwin’s contemporary and one of the great botanists, said of Darwin’s work on orchids:

‘the explanation of all these and other extraordinary structures, as well as of the arrangements of blosoms in general, and even the very meaning and need of sexual propagation…belong to our age and to Mr. Darwin. To have originated this, and also the principle of Natural Selection... and to have applied these principles to the system of nature in such a manner as to make, within a dozen years, a deeper impression upon natural history than has been made since Linnaeus, are ample title for one man’s fame’

His work too is more than historically important. For example, his work on the movement of plants laid the ground work for the discovering of the first plant hormone, auxin.

Darwin's Islands: The Galapagos in the Garden of England
by Steve Jones, Little, Brown: 2009

See also Darwin's books on botany in the bibliography.