Geology: Darwin on the Rocks

Charles Darwin would be remembered today, even if he had never published his work on evolution, for his geology. His geological work ranged from physical geology, on volcanoes, coral reefs and the upheaval and subsidence to land; to palaeontology, collecting fossils during his time on the Beagle voyage and studying fossil barnacles in his home in Downe, Kent. His own work on geology contributed greatly to his views of life on earth, but he was equally adept at understanding the work of others and how it related to his ideas. As a young man Darwin was passionate about geology, dreaming of becoming a big name in the field. In 1859, just months before the publication of On The Origin of Species, Darwin won the Wollaston Medal, the highest honour of the Geological Society of London ‘for his numerous contributions to Geological Science’, marking him out as one of the great Victorian geologists.

As with many of Darwin’s interests they began at a young age. Charles and his elder brother Erasmus had their own chemistry laboratory built for them in their garden shed. Here the two brothers conducted numerous chemical and mineralogical experiments, working from popular ‘recipe’ books. These experiments must have been quite pungent, as his activities in his shed earned him the nickname ‘Gas’ at school.

Darwin’s interest in geology was rekindled during his university years, first at Edinburgh where, often instead of medical lectures, he attended lectures on geology and chemistry. After moving on to Christ’s College, Cambridge, Darwin was introduced by his mentor John Henslow to a geological giant, Adam Sedgwick, whom the Cambridge University earth sciences museum is named after. After passing his degree examinations Sedgwick took Darwin ‘geologising’ in Wales, where he was taught how to draw geological maps and collect and describe specimens.

This was a valuable trip! When Darwin returned home from Wales waiting for him was an invitation to join the H.M.S. Beagle on it’s voyage to map the coast of South America. It was during the Beagle voyage that Darwin was able to stretch his legs as a young geologist.

As the Beagle sailed steadily on towards South America, Darwin continued his geological education for himself. Henslow and Sedgwick had recommended that he took, what would become one of the founding texts for geological science, the Principles of Geology by Charles Lyell. In this text Lyell argued against the cataclysmic geology that Darwin had been taught by his geology lecturers, in favour of a view that the earth is shaped by the slow processes which can be observed today. This view of geology, where small changes are summed up over long time periods is called gradualism. Seeing the world from this perspective would be one of Darwin’s most important lessons.

During the voyage, Darwin observed many of these processes for himself. He saw the effects of gradual uplifting of land in St. Jago. And in South America he saw a volcanic eruption at Mount Osorno, and lived through an earthquake in Valdivia. He made extensive notes on his observations of weathering, crystallisation of lava, measurements of raised beaches and many other sights which caught his interest.

His keen eye and rigorous note taking allowed him to formulate his geological theories. His first was on how coral reefs formed. Previously many geologists thought coral reefs grew on underwater volcanoes. Darwin didn’t see the logic in this, instead he applied what he had read and seen of gradual subsidence of rock to formulate a new theory. He suggested that corals grow around islands, but over long periods of time the sea floor can subside. The coral would continue to grow whereas the island would be washed away, so leaving the coral reef alone to be observed now. Darwin’s theory was instantly accepted by the geological community. In 1952 surveys by the US Atomic Energy Commission in Pacific coral reefs proved Darwin’s theory was correct.

Darwin’s second theory was also successful. He formulated a theory to explain how volcanic islands are formed. That is, volcanoes are usually formed when lava repeatedly erupts so layers of volcanic rock are laid down successively building up the cone. At the time, many geologists believed a volcano grew up because of pressure from below and the crater then subsided. Darwin’s idea was right. Darwin almost struck on a much bigger idea, his observations led him to believe the earth’s crust was moving, rising in some places and subsiding in others. A few more pieces of evidence or leaps of logic would have led him to the theory of plate tectonics which was proposed and accepted in the 1960s.

Some of Darwin’s most important geological work was on fossils. He collected many impressive fossils during the Beagle voyage which were displayed in London and increased his recognition amongst the scientific community. His later work on living and extinct barnacles would secure his reputation and give him the confidence to publish his views on evolution.

Darwin found many impressive fossil specimens in South America including bones of elephant-like animals called Mastodons, giant ground sloths called Megatheria, large armadillo-like Glyptodons, a “gigantic guinea pig” called a Toxodon and fossils of horses, which were previously not thought to have lived in the Americas. These fossils were packed up carefully and posted back to England where Henslow cared for them and publicised Darwin’s name and specimens. As well as collecting, Darwin made detailed notes about his finds, the type of sediment they were found in and what other fossils were found in that layer. This would later allow him to piece together clues as to what sort of environment these huge animals lived in. 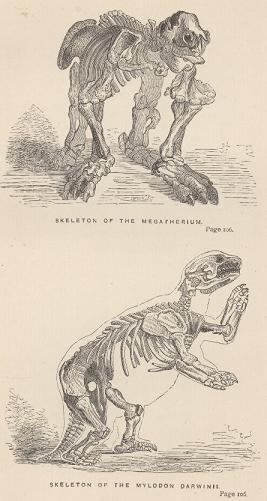 On his return from the Beagle voyage, Darwin was assisted by many experts in documenting and describing his findings. Richard Owen, the leading anatomist of the time, helped Darwin with his fossil mammals. Owen was able to discern that the fossils Darwin collected represented distinct species, but were more closely aligned with living mammals found in South America than elsewhere. These conclusions were important to Darwin, the extinction of older species and their replacement by distinct, but related species were consistent with his developing views of evolution.

After Darwin finished writing up and publishing his notes and diary from the Beagle Voyage he moved on to his next big project, writing a monograph on living and extinct barnacles. This was slow work and Darwin’s health was declining; it eventually took him eight years to complete. His barnacle work though was quite profitable; he published four books on the subject and received much professional acknowledgement for them. Toiling over thousands of fossil and living barnacles also showed Darwin how variable every part of an individual may be and helped develop skills in taxonomy and comparative anatomy which would prove vitally important when writing his later works, including The Origin.

The Origin & The Fossil Record

Geology plays a key role in Darwin’s arguments for evolution by natural selection in The Origin. He devotes two whole chapters to geological problems, geological evidence is routinely called upon throughout the book and Darwin refers to Lyell’s gradualist geology (which was by then accepted) to demonstrate that slow processes can have big effects.

The two chapters that deal solely with geology are titled On the Imperfection of the Geological Record and On the Geological Succession of Organic Remains. In the former, Darwin explains why the fossil record does not document the huge number of intermediates that Darwin’s theory suggests would have existed. Darwin’s explanation is inspired by his observation of erosion of rock and fossils by geological processes and by Lyell’s analogy of the fossil record as a book. Darwin writes:

‘I look at the natural geological record, as history of the world imperfectly kept, and written in a changing dialect; of this history we possess the last volume alone, relating only to two or three countries. Of this volume, only here and there a short chapter has been preserved, and of each page, only here and there a few lines. Each word of the slowly changing language, in which the history is supposed to be written, being more or less different in the interrupted succession of chapters, may represent the apparently abruptly changed forms of life, entombed in our consecutive, but widely separated, formations.’

Darwin claims that all the transitional forms between two living species will not be found. Darwin later adds to this a discussion on the huge amounts of time involved and the various processes that will destroy fossils to argue that the apparent lack of fossil evidence for his theory is not a death blow. He also discusses why groups of animals and plants appear suddenly in the fossil record, invoking migration and range expansion and that the earlier forms may just not have been found yet; a compelling argument when we consider what amount of the earth’s crust has been investigated and that new fossils are frequently found pushing the origin of a group back by tens of millions of years.

In the chapter On the Geological Succession of Organic Remains Darwin discusses how his view of a slow and gradual process of evolution through descent and natural selection explains why related species replace each other in the fossil record and why there appears to be a succession from lower to higher groups of species. These observations are exactly what would be predicted by a theory of evolution through common descent.

Darwin argued that what evidence could be extracted from the fossil record supported his theories. The fact that few intermediates are known is not a problem for his ideas, as it is expected based on our understanding of geological processes. In later editions however, Darwin did include discussions on new fossil finds, including the link between birds and reptiles through fossils such as Archaeopteryx. In the 150 years since The Origin was published many more examples of fossils which link distinct groups have been found; as the fossil record becomes more complete it only adds to the evidence for evolution.

The influence of geology on Darwin’s work was huge. His early training at Edinburgh and Cambridge and the lessons he taught himself on the Beagle laid the foundations for a great career in geology. Darwin published successful theories on a range of different geological problems; from coral reefs to volcanoes and from fossil barnacles to fossil giant-sloths. This work helped establish him as a scientist and earned him memberships to the great scientific societies of the day. Darwin’s geology was also important in the development of his theories of evolution, teaching him important lessons in gradualism, taxonomy, classification, comparative anatomy, and acquainting him with the finer details of the fossil record which he would use to support his ideas, and others would use to dismiss them.

Journal of Researches
by Charles Darwin, 1839 (any edition)