Flowering plants belong to a group called angiosperms. Darwin had little evidence from the fossil record to back up his theory when it came to the evolution of angiosperms. They appeared all of sudden in quite recent rocks and had no obvious ancestors to have evolved from. It was, for Darwin, an “abominable mystery”.

The expanding fossil record has since given us some evidence. Land plants first evolved about 400 million years ago. They reproduced a bit like most fungi, by releasing spores into the atmosphere. The first evidence for pollen (which of course is linked to flower evolution) is found in rocks 130 million years old. The first true angiosperm was probably Archaefructus liaoningensis which appeared around 125 million years ago. There is evidence to suggest angiosperms evolved from a group called Gigantopterids, which didn’t flower but had many similar traits such as the structure of the leaves and stems. It also seems they produced the same chemical compounds used by angiosperms to protect their flowers from insects.

Modern studies which use DNA to create family trees suggest a small shrub called Amborella trichopoda, found only in New Caledonia, is the most primitive living angiosperm. It has very small and simple flowers compared to the sorts of things you normally see in a flower shop!

Evolution Of A Novelty

Flowers are the reproductive organs of angiosperms. Their function now is to attract pollinators to visit the flower to help spread the plant’s pollen and to bring pollen from other plants to the female organs. Their sudden appearance in the fossil record suggests to some that they evolved in an isolated island; the evolution of the flower structure was so successful that the ancestral angiosperm spread quickly and diversified. The adaptive advantage of the first flower-like structure probably came from exploiting other organisms to help pollinate the plant in a way similar to what we see today.

So how did the flower structure itself evolve? Flowers appear quite distinct from other parts of the plant today; how could a novel structure just appear?

Of course flowers didn’t just appear. Like other structures they evolved by modifying something else. In this case, molecular genetics has shown us how. Plant scientists were able to use plants which had mutations in their flowers to pin down the genes involved in flower development. The genes they found are the same ones as those involved in leaf and stem development. This is good evidence to conclude that the earliest flowers were simply modified leaves. Small changes in the leaf development gave rise to the earliest form of flower; over time natural selection moulded this simple structure into the sorts of flowers seen today.

This is a great example of something called exaptation. This is where a structure evolves to do one function, but is then modified to take on another. Exaptation is a key process in evolution.

How do genes which normally control the development of other structures control the development of flowers? The answer is in the way they are used. Two scientists called Coen and Meyerowitz proposed a model to explain floral development in 1991. They called it the ABC-mode. They examined many strains of plants which had floral mutations and put the genes responsible into three groups depending on what effect they had. Group A genes affect sepals and petals, group B affect petals and stamens, and group C affect stamens and carpels. 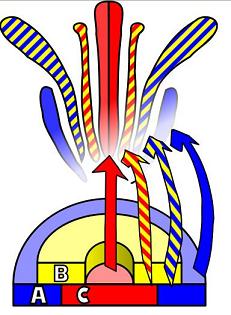 Since its proposal, new findings have been incorporated to make the model more complete but it follows the same basic rules. Flower development is a very good example of how different combinations of genes produce different effects.

Comet orchids have nectar spurs up to one and a half feet long. Charles Darwin saw some and set about using his theory to figure out why such a structure can exist. He concluded “in Madagascar there must be moths with proboscises capable of extension to a length of between ten and eleven inches!”. At the time no such moth was known and to many the idea seemed ridiculous.

But sure enough, eventually such a moth was found – Darwin was right! Xanthopan morganii praedicta was named in recognition of Darwin’s prediction. It has a foot-long proboscis, just right for getting nectar from the foot long nectar spur of the comet orchid. 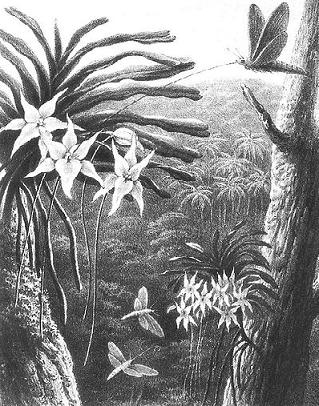 Such close relationships between pollinators and plants are very interesting. Clearly many angiosperms rely on their pollinators for reproduction. What happens when the flower evolves? Can the pollinator keep track of its preferred plant? When a beneficial mutation arises it must spread, but to do so that requires the help of the plant’s pollinator. The two species, then, must co-evolve.

Dr. Beverly Glover, a research scientist at the Plant Sciences department in Cambridge, works on this sort of question. She is interested in the evolutionary development of flowers and their interactions with pollinators. Some of her work has involved showing hundreds of mutant flowers to bees to see what sort of mutations affect the bee’s perception of the flower. This sort of work is really interesting and suggests the way an insect perceives different mutations help direct flower evolution!

You can read more about Dr. Glover’s work here. She has also recently released a book: Understanding Flowers and Flowering: an integrated approach (2007).