Darwin’s work quickly captured the minds of many writers. More recently, evolutionary ideas have been used to explore how texts and even languages change over time.

Darwin’s work captivated the public interest and infiltrated the minds of Victorian writers. You can see why, evolution is full of good material for books and plays; competition, the struggle for existence, and lots of sex. Darwin also disturbed people’s views of themselves and made them question their values and ideals. Darwinian themes pop up again and again in Victorian literatur, and in the work of writers such as Thomas Hardy, Alfred Tennyson, Samuel Beckett, George Eliot and Bernard Shaw. How Darwin influenced these writers and others has become a subject of great interest for literary scholars. Darwin continues to inspire writers and more recently film makers too; notable films with a Darwinian bent include Inherit the Wind, Flock of Dodos and 2001 Space Odyssey,

If you’d like to learn more about this try one of these books:

How Do Texts Evolve?

Another way Darwin's Thoery of Evolution has influenced literature has been the application of evolutionary principles to the study of how texts change through time. Before printing was invented, manuscripts of important books were copied by hand. This introduced errors, some random, some probably on purpose. These changes are in some ways akin to mutations in DNA and evolution through descent with modification. 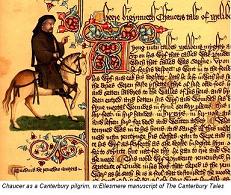 For many years literary scholars have been interested in studying how and when different versions of the same text arose, more recently this has involved applying models developed to understand the evolution of DNA. This new Systematic Analysis can be used to reconstruct the probable original text and see when and in what ways this text has been edited through the decades.

Prof. Chris Howe, a biochemist at Cambridge University has pioneered the use of programs designed to study DNA evolution in studying the evolution of manuscripts, working on Chaucer’s Canterbury Tales and the Greek New Testament.

The same sort of approach has been applied to understanding the diversity of languages around the world. Languages are passed on from generation to generation by parents teaching their children to talk their native tongue. But sometimes the way words are pronounced or spelt can change – think about how Shakespeare wrote compared to how we do now. This can be random, or can be influenced by cultural exchange, such as words from other regions being adopted – English for example has borrowed many French words such as café. Languages can also go through changes of fashion, we can see this happen now with the way people use texts and how they spell words. All these changes are passed on through the generations.

So languages can evolve, much like species, through descent with modification. By comparing different languages it is possible to trace their evolutionary history and to see which languages group together to reveal shared ancestry. This can tell us a lot about human history and how culture evolves.