Evolution can be a very slow process. Too slow to observe within a human life time? Darwin seemed to think so, but actually we now have numerous examples where long term studies of populations document evolution happening within decades. Through meticulous measurement and attention to detail we can watch evolution in action. Evolution within populations is called microevolution and the changes are often small, but adding up these small differences through time is how evolution works. Here we discuss a few nice examples of evolution in action in finches, fish, and a bit on sheep and deer. You can read about another example, peppered moths, here.

One of the best studied examples of evolution in action comes from work done by Prof. Peter Grant and his wife Dr. Rosemary Grant on the beak size of Galapagos finches (aka Darwin’s finches).

These birds live on the Galapagos Islands, off the coast of Ecuador, right on the equator. For almost 40 years researchers have been living on these islands and taking detailed measurements of the birds. They focus on a few islands in particular, one is called Daphne. Daphne is small enough to be able to count all the birds on the island, and catch them often enough to keep track of their growth and size. The researchers have even been able to work out what birds mate with each other, and how successful the young are at surviving.

Survival isn’t easy on these islands; it’s baking hot during the day, freezing cold at night and there isn’t much food. Because of this, the birds have very specialised feeding behaviours. We see them now as 13 species all feeding on different things in different ways. But all these 13 species evolved from one common ancestor. Originally a South American finch colonised the island and became distinct from the mainland population (peripartic speciation). Different sub-populations of the birds also began to occupy new habitats and specialise on different ways of feeding. Selection kept these groups apart because hybrids were less fit (parapatric and sympatric speciation). 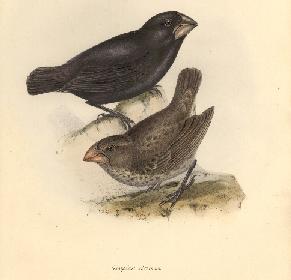 The Grants have done a lot of work on three of these species in particular, the small, medium and large ground finches. All three species have specialised in eating seeds. There are many different plant species on Daphne; some have small, soft seeds and others have large seeds with a tough, spiny outer coat like a nut. Each ground finch species has evolved a beak adapted to target different categories of seeds. The small ground finch has a small beak (3-4mm deep) and eats mostly small seeds, the medium ground finch has a medium sized beak (5mm deep) and eats moderately sized seeds and the large ground finch targets larger seeds that the others can’t crack open; it has a heavy duty beak (8mm deep) to allow it to do so.

The weather conditions on the islands vary from year to year. The islands are right in the middle of the path of a weather system called El Nino. El Nino's create large fluctuations in weather on the islands so sometimes it’s really hot and dry and sometimes it rains all day for months on end.

The weather affects the abundance of seeds on the island. When it's very hot and dry few seeds are produced and competition for food increases amongst the finches. The Grant’s research team were on the island during one dry spell that lasted much longer than usual. The island became very dry, vegetation died back and plants stopped producing seeds. They watched and recorded measurements about the seeds and beak sizes as the birds ate their way through the last of the easily eaten nuts and many starved and died. After many months without rain only the biggest, toughest and most spine covered seeds were left.

The researchers found that the lack of food had increased competition among the birds. The smaller beaked birds fared worst and amongst the large ground finch there was very strong selection for larger beaks, because the individuals with the largest beaks were the only ones able to eat. In fact, compared to the average depth of beak at the start of this dry period, by the end of it the average beak depth was 1mm bigger. Doesn’t sound like a lot, but that extra 1mm was the difference between life and death for these birds. Furthermore, that means it would only take two similar events to produce a difference in beak depth that is similar to the differences among these three species!

Another example comes from Prof. David Reznick’s work on guppies which live in rivers in a Caribbean Island called Trinidad. The guppies either live with or without the presence of a predator fish, a pike-like thing. So some populations grow up having to avoid being eaten, others don’t. The presence of the predator changes the selective pressure acting on the guppies, so they have evolved different traits. 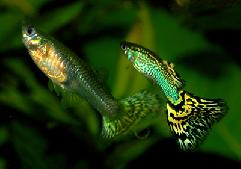 The ones living with predators grow up faster, mature at smaller sizes and reproduce earlier; they need to breed as soon as possible because they could get eaten any time. In rivers without predators the guppies can grow up at a more leisurely pace and put more energy into their offspring.

The team left their fish in their new homes and came back after just ten years. Their prediction was that evolution should be replicated: the fish would evolve larger body sizes and delayed maturation in rivers without predators, and evolve smaller body sizes and earlier maturation in rivers with predators. Sure enough that’s exactly what they found! This proved the natural populations were adapted to maximise their reproductive output by adopting different strategies depending on their circumstances.

Another fish example is armour plating in sticklebacks. Since the last ice age, three-spined sticklebacks have been very successful, spreading from marine populations up into rivers and lakes across the world. As they have spread, sticklebacks have evolved a number of adaptations to help them evade predators. 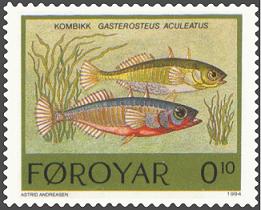 Some populations have large pelvic spines, which make them harder to swallow so protect them against big predator fish. Some populations lack the spines, these fish usually swim quite close to the bottom of the water bed, within reach of crustacean predators which can use their claws to reach up and grab the pelvic spines of the sticklebacks. For these populations, lacking the pelvic spines helps them to avoid a different sort of predator. Researchers have even been able to pinpoint the gene involved in pelvic reduction, it's called Pitx1 and seems to be involved in multiple, independent evolutionary events when spines have been lost.

Another defensive trait is armour plating. Sticklebacks which live in marine environments have a series of bony plates along either side of their body. These make it difficult for predators to eat the fish once they’ve caught it, so often the stickleback will get away. The problem with armour plating is that it slows the fish down, but since in marine environments water tends to be quite clear it’s unlikely the stickleback could escape it’s predator by swimming away.

In freshwater environments however the water can be a lot murkier and there could be selective pressure to bolt quickly when attacked so as to disappear into the murk. This would require the armour plates to be lost. In fresh water sticklebacks around the world this is what is seen. The number of plates is reduced, and sticklebacks go for a quick escape strategy of defence. Scientists have also pinpointed the gene involved in this phenotypic change, its called ectodysplasin, and, like Pitx1, it's responsible for similar changes in multiple independent cases.

Some of the researchers that work on stickleback evolution include Prof. Dolph Schluter who works at the University of British Columbia and Dr. David Kingsley who is at Stanford.

Prof. Tim Clutton-Brock is based in the Zoology Department at Cambridge. Amongst other things (his group’s research was behind the award winning TV show Meerkat Manor) he and his colleagues studied natural and sexual selection in wild populations of Soay sheep and Red deer.

All the deer and sheep on each island are individually recognisable and details of mating, behaviour, development, population structure are all recorded and samples are taken for genetic studies. These long term records allow researchers to look at patterns of population dynamics, survival and reproductive success. You can read much more about these projects by clicking on the links above.

The Beak of the Finch
by Jonathon Weiner, Vintage Books: 1995

How and Why Species Multiply
by Peter & Rosemary Grant, Princeton: 2008

Why Evolution is True
by Jerry Coyne, OUP: 2009