‘Probably all the organic beings which have ever lived on this earth have descended from some primordial form, into which life was first breathed’

This is all Darwin says in The Origin of Speciesabout the origin of life. When the public is asked about what problems they think face evolutionary theory one subject that comes up quite often is the origin of life. Evolution, they say, does not explain how life began, therefore there must be something wrong with evolution.

When people say this they are partly correct: evolution does not explain how life began. But that is not the aim of Darwinian evolution; all natural selection requires to work is that there is life, variability and competition. Criticising evolutionary biology for not explaining how life began is like criticising the kettle for not making good toast. But since we’re on the subject…

Secretly, Darwin did have his own ideas about how life kicked off; he thought that life probably began spontaneously from the chemical soup that existed as the earth began to calm down a bit following its violent birth. He wrote to his friend Joseph Hooker expressing this idea:

‘But if (and Oh! What a big if!) we could conceive in some warm little pond, with all sorts of ammonia and phosphoric salts, lights, heat, electricity etc., present that a protein compound was chemically formed ready to undergo still more complex changes’

Darwin had actually hit the nail on the head, the origin of life is a problem for chemistry and biochemists.

In 1953 two people created Darwin’s warm little pond. Stanley Miller and Harold Urey, working at the University of Chicago mixed water, methane, ammonia and hydrogen in a glass bulb and added heat and sparks of electricity; they were trying to recreate the atmosphere that existed during earth's early days to test whether organic molecules such as amino acids, which are the building blocks of proteins, could have spontaneously formed. They ran the experiment for a week and amazingly, when they analysed their concoction, found over 10 different types of amino acids. When Miller’s old tubes were reanalysed in 2008 with new equipment, they discovered they had actually created over 20! 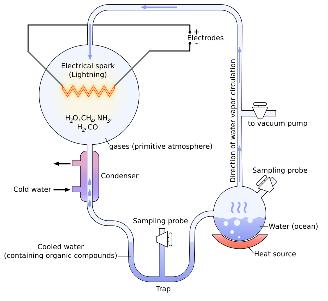 Since 1953 researchers have continued trying to recreate the early moments of life. For example it became clear that Miller and Urey’s mixture of chemicals was not quite right; the early atmosphere contained a lot of carbon dioxide and a bit of nitrogen. These new experiments created hundreds of amino acids!

All life on earth uses DNA to encode its genetic information. However another molecule called RNA is a more likely candidate for the early genetic code. RNA and DNA are very similar; they both consist of a backbone of sugars and phosphates with organic bases sticking off the side, like a ladder sawn down the middle, except that DNA usually comes in double strands, the famous double helix. In fact RNA is very similar to DNA. RNA is less stable than DNA, but has a number of interesting properties; it can for example cut itself up and replicate itself. It’s used in living species as, amongst other things, the intermediate between DNA and proteins; DNA is copied to RNA and proteins are made by reading this RNA. It seems likely that DNA evolved as a more stable way of storing information but that RNA was there first. Also RNA can form tiny machines - including the machine called the ribosome which reads the RNA and builds the proteins.

However, attempts to create RNA from scratch have proved difficult, leading some scientist to speculate that the earliest forms of life had another system. Experiments have been able to create other, novel nucleic acids such as PNA and TNA which may have been the first replicating molecule – the first step in life. These were subsequently out competed by first RNA and then DNA which probably evolved from them. Once replicating molecules existed, they would compete for the organic molecules from which they form and natural selection would take over.

Perhaps the next big step in life was the origin of the cell. All cells are bound by a layer of fatty acids which help stabilise the environment around the nucleic acid and help protect the all important nucleic acids. How did this fatty acid layer arise? Fatty acids are organic molecules like amino acids, and can form spontaneously in chemical soup experiments. Experiments where RNA and fatty acids are mixed together show that quite often the RNA becomes wrapped up in small bubbles of fatty acids; a simple, proto-type cell. These bubbles appear very stable and can resist high temperatures and are porous enough to let the building blocks of RNA in, but not porous enough to let RNA out. Could this have been the case for the first unicellular organisms?

Experiments such as these strongly suggest that life is a product of the basic chemistry that existed at the beginning of earth’s history. Evolutionary biology does not attempt to explain the origin of life, but chemists have come up with some excellent theories and some good supporting evidence. The key though is that as soon as life began, as soon as some flimsy molecule started to replicate, natural selection could act and evolution took over.