Darwin is remembered for his brilliant science: in many ways though he was equally gifted in philosophy. He himself made many fundamental changes to the way we approach philosophy, and his work has inspired the work of many philosophers in the last 150 years.

From Darwin With Love

Perhaps Darwin’s two biggest contributions to conceptual philosophy were the introduction of population thinking, and genealogy. Prior to Darwin the dominant view of thinking about the natural world was typological thinking. According to this approach species are fixed ‘types’ and variability around this type is rather meaningless because there is no gradation between types, so evolution cannot occur; a cat is of the cat type, all cats are fundamentally the same and remain so through time. Darwin introduced a new way of thinking based on individuals, so called population thinking. He stressed the uniqueness of the individual, no two are the same. These unique individuals form populations which can be considered in statistical terms; there is an average cat size, but all cats are different sizes and that average value is just a statistic. Darwin’s new way of thinking about nature puts the emphasis on individual variation so opens the door for thinking about evolution.

Darwin’s second great gift was genealogy; humans are part of the tree of life, a small twig no more or less important than any other twig. This view of ourselves means all the topics philosophers were previously interested had to be thought of as the products of a process that has modified them over time.

Just as Copernicus showed the universe does not revolve around the earth, Darwin showed the natural world does not revolve around humans; we are no more unique than any other species. Are we at least the pinnacle of evolution? According to Stephen Jay Gould, definitely not. If we were that would imply evolution has some direction and is progressive.

Gould argues that because natural selection works on whatever variability is to hand, small changes in the history of life can have big changes in what species of organisms evolve and how they occupy the environment. Therefore if life restarted from scratch the sorts of organisms alive 3-4 billion years later would be very different from those we observe today; there would most likely be no humans.

Gould’s argument is countered by some, such as Simon Conway Morris, who works in the Earth Sciences Department at Cambridge. Conway Morris is interested in convergent evolution; when evolution stumbles upon the same solution twice independently. For example the streamlined bodies of dolphins and fish, or the wings of bats and birds. He argues that similar environments can lead to the evolution of the same traits. So if life was re-run, there would eventually be a niche for a thinking, tool using bipedal organism and evolution would fill it with a human-like organism.

Getting Better All The Time?

What about progress? Philosophers of science still debate whether evolution is progressive, and if it is, in what way. Darwin himself seemed to think it wasn’t in the sense of an animal being above another: ‘it is absurd to talk of one animal being higher than another’. However he does allow progress in the sense of an increase in adaptedness: ‘the inhabitants of each successive period in the world’s history have beaten their predecessors in the race for life, and are, in so far, higher in the scale of nature’.

Since Darwin, others have formed different ideas. For example Gould suggests there is a trend to progress towards increasing complexity but only because when life first evolved it was very simple; it only had one direction to go. Richard Dawkins on the other hand, suggests there is progress towards increasing adaptedness to fill an environment. Others, like John Maynard Smith, view the progress of life in a number of major transitions during which there has been a division of labour; for example during the transition between prokaryotes and eukaryotes two previously independent uni-cellular species came together, one becoming an early mitochondria, and divided up their jobs. Another example is the evolution of multicellularity, when previously independent cells divided their jobs so could become more complex; another is the evolution of society when individuals became specialised and dependent on one another.

Popper & The Philosophy Of Science

What about science itself? How do we understand the scientific process? The unlikely marriage of Darwin’s theory of evolution by natural selection with aspects of the theory of knowledge, produced a fresh perspective in the philosophy of science, one that has revolutionised that field of philosophy entirely. 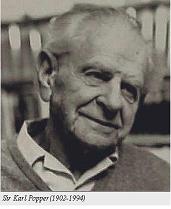 Let us begin by rewinding to the 70’s: Karl Popper, a figure as prominent in the philosophy of science as Darwin is in biology. Let's turn our attention to All Life is Problem Solving – a seminal series of essays. It was here that Popper tackled a curious problem: of the progress of scientific knowledge. If the truth content of our theories in science, even the best of them, cannot be verified by scientific testing but can only be falsified, how then is it that as science “grows”, knowledge appears to grow in conjunction? By falsifying theories, surely we reduce the level of knowledge each time we try to advance a scientific theory?

According to Popper, the evolution of theory because of the selective pressure of error elimination (in other words, the scientific method) was what reflected progress – however, that being toward more and more interesting problems. This interplay, Popper believed, between conjecture and refutation is key to the advancing of scientific knowledge. Their parallels to the interplay between genetic variation and natural selection are almost too obvious to point out.

While it is true that Popper’s view is not held by everyone, there is no doubt that it was evolutionary theory, thanks to Darwin, that triggered a fresh debate. It is clear that the rapid development of Popper’s ideas regarding the advancement of scientific knowledge, and subsequently the rapid rise of Popper’s fame, owed a huge debt to Charles Darwin and his greatest work – this not denied by Popper.

Darwin has also had further impacts on how philosophers approach their work. Darwin was both a theorist and a practical scientist; he allowed the collection of facts and the testing of ideas to drive his thinking. Inspired by this approach a new branch of philosophy has emerged called Naturalism which states that philosophy should not contradict good science, or that science can solve philosophical problems. Others are less rigid, suggesting evolutionary science can provide tools for thinking, inspiration and analogy as well as direct answers. In any case, Darwin’s work has had a major impact on philosophy.

Cambridge University has many excellent philosophers of science, some of whom, like Tim Lewens specialise on the philosophy of biology and Darwin's contribution to philosopy

Life's Grandeur: The Spread Of Excellence From Plato To Darwin
by Stephen Jay Gould, J. Cape: 1996