If you had to choose one subject left untouched by the impact of Darwin’s ideas, you might think a safe bet is physics. It’s difficult to see how unravelling the mechanism for the diversity and complexity of life could affect the way scientists view the Universe. Except that it has… 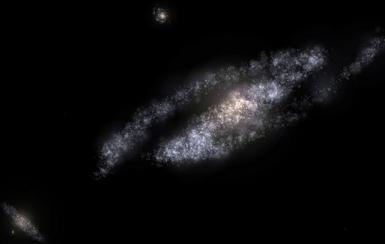 Did and does the cosmos evolve? This was a question that arose in the 1960s and has since been advanced by theoretical physicists such as Lee Smolin at the University of Waterloo in Canada who proposed the theory of Fecund Universes, or the Cosmological Natural Selection Theory.

It is based on some proposed characteristics which the cosmos shares with biological organisms. First of all, universes show a degree of variation, just like individuals of a species; they are all slightly different. The nature of our own universe has been characterised by just six numbers; the number of dimensions we live in, the ratio of gravitational and electromagnetic strength, the ratio of mass lost to energy when hydrogen fuses to form helium, the amount of dark matter, the cosmological constant and the number which describes how smooth the universe looks. Variation in these numbers could produce dramatically different universes.

The second proposed observation is that universes may ‘reproduce’ by propagating themselves when a black hole collapses. The new universe which emerges can be different from its parent universe. This is akin to reproduction and mutation as seen in the biological world.

The universe we live in may be running its own evolutionary race! This remarkable (and controversial) idea is, quite literally, a million miles from what Darwin envisaged, but shows the far reaching impact of his thinking.