Who Was Charles Darwin?

Who was Charles Darwin? You’ve probably seen a picture of him and he probably had a bald head, a huge bushy beard, a bit of a funny nose and he probably looked a bit miserable. But he wasn’t always like that! Charles had an amazing life; he travelled the world, saw volcanoes explode and earthquakes, rode on the back of giant tortoises, and went hunting for ostriches. When he came home, he changed the way we think about living things!

Too Cool For School!

Darwin’s father was a very fat doctor who lived in Shrewsbury, England with his wife. Charles was their fifth child, born on 12th February 1809. Sadly his mum died soon afterwards, but he had lots of older sisters to look after him and a big brother called Erasmus who was his best friend.

Charles and Erasmus got up to all sorts! They set up a lab in their garden shed – a hobby which earned Charles the nickname “Gas” at school. Charles was also a big collector, stuffing his pockets with creepy crawlies, stones and bits of plants. He loved exploring the country side around his house and often went for long walks. 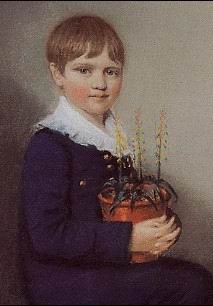 Charles loved nature, but he hated school. He had to learn Latin and Greek texts off by heart and thought it was ridiculously boring! When he was older he said he learnt absolutely nothing useful at school! But Charles’ Dad just thought he was lazy so sent him to Edinburgh in Scotland to learn medicine and become a doctor.

But Charles hated medicine too! In those days there were no painkillers and operations were performed on patients when they were awake – there was lots of blood and screaming and the young Darwin couldn’t bear it! He spent most of his time on the beach looking at sponges.

So Charles quit medicine and his Dad suggested a new career – he could become a priest! Off Charles went to Christ’s College, Cambridge to study to become a priest… but he didn’t really like that! He spent all his time with his cousin collecting thousands of beetles and putting them in boxes. He also set up a dinner club which ate exotic meats!

At Cambridge Charles met Professor Henslow who was big into plants, and Professor Sedgwick who was big into rocks. They took Charles under their wing and taught him how to study nature in a scientific way. Finally Charles found something he loved!

The Voyage Of A Lifetime 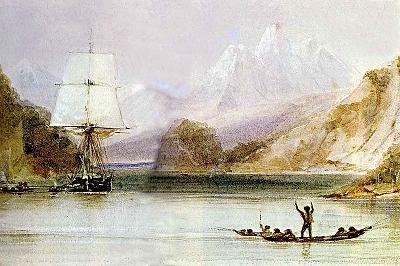 When Charles was 22 he was invited to join a voyage round the world. H.M.S. Beagle was a ship responsible for travelling the globe, making maps of coastlines. The ship’s captain, Robert FitzRoy, was a lonely man and wanted a friend for the trip to keep him company. The Beagle was to go all the way across the Atlantic to South America to draw maps of the coastline. They returned home via the Galapagos, New Zealand, Australia and South Africa. It took five years!

Darwin’s time on the Beagle was mixed; when they were at sea he was horribly sea sick and couldn’t do anything except lie in his hammock nibbling biscuits and reading books. One book he read was by a man called Charles Lyell, who was big into rocks. Lyell had decided that the earth was very old, millions of years old, and that over time it had changed very slowly. He also said that we can see this happening today

When the Beagle docked at land Charles was free to explore! He set about testing Lyell’s idea, in his five years abroad he witnessed earthquakes and volcanoes, and found fossils of seashells on top of the world’s biggest mountains. Everything he saw convinced Charles that Lyell was right, so he started thinking about life as being very old and possibly changing slowly over time.

In South America Charles found some amazing fossils. Fossils are the remains of very old animals and plants that have been buried and turned into rock. Charles found fossils of ten foot tall sloths, and huge cow-sized armadillos! These fossils convinced him further that life on earth was very old.

When the Beagle stopped at the Galapagos Islands, in the Pacific Ocean, Darwin found some really strange animals. He found lizards that swam in the sea and ate algae, tortoises big enough to be ridden like horses, and birds that were so fearless you could grab them by the legs! Darwin noticed a type of bird called a mockingbird was very similar to the mockingbirds he had seen in South America. Similar, but also different! He wondered if the two birds were related.

He collected lots of specimens while he was away, enough to fill all his storage on the ship and more! Some of the specimens he collected were finches from the Galapagos; these are now very famous. When Charles got home he asked a bird expert about them and was told instead of being one species, there were 13! Charles thought they were all related to the finches in South America but that they had evolved into many different species!

He also saw that individuals are different from each other and that parents and offspring are more similar to each other than they are to others. So Charles thought different individuals might survive better than others because they are a little bit bigger or better at something, and that if they do survive more often they will have more kids. So over time all the little differences would add up until you see a big difference. When Darwin first told one of his friends he was working on ideas about evolution he said it was like 'confessing a murder'… at this time most people thought evolution was a load of rubbish!

So Darwin needed evidence to support his ideas; unfortunately he was very busy with other work. He spent ten years writing books about his travels, then another eight writing about barnacles. But he kept working on his theory. He quizzed his friends about different topics and worked on barnacles, pigeons, flowers, fossils and anything else he could get his hands on to test his ideas.

In 1859 he finally wrote a book about what he had found out:On the Origin of Species. It was a sensation! Some people were very angry because they believed that a God had created all animals and plants and that they stayed the same. Charles’ idea also meant that humans weren’t special; they had evolved too just like any other animal. Darwin and others concluded that humans evolved from apes, which really upset some people who liked to think humans were completely different from animals.

But other people thought it was great! Darwin had so much evidence all the animal and plant and rock scientists decided he was right. Charles became very famous and got lots of awards and prizes!

Why Does He Also Look A Bit Miserable?

As well as working hard at his scientific work, Darwin got married, had lots of children and was a very important man in his local village. They lived in Downe, Kent in quite a big house with a nice garden where Charles could walk about and keep his pigeons.

Sadly for Charles as he got older he got very sick. People think he was bitten by a nasty bug in the rainforest in South America and got a disease, but noone know for sure. He was so sick he could hardly go a day without throwing up, he even had a special cupboard built in his office to be sick in! 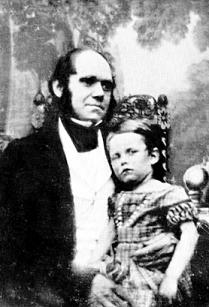 So when you see Charles looking old and grumpy, part of the reason was because he was ill and in pain. But also, it was the style of the time to be quite serious. Darwin was actually a very nice man, he loved his work and his family, had a great sense of humour and wrote lots of letters to his friends when he was sick.

When Charles died, in 1882, aged 72 the country decided he was such an important scientist he should be buried in Westminster Abbey. This was a privilege of only the very most important people. Hundreds of people wrote to newspapers to say how great Charles was, and people came from all round the world to go to his funeral.