The University of Cambridge celebrates the 800th anniversary of its foundation in 2009. Since Darwin became an undergraduate in 1827 the university has changed rapidly from a traditional Christian institution mostly for the upper classes to one of the best research centres in the world, open for everyone to apply to. Of course it maintains some traditions, but many more have been left aside and others created. So what are the differences between student life in Darwin’s day and now?

Darwin was not able to complete the course in medicine at Edinburgh, and his father then decided the best career for his son was to enter the Church of England. To do this you had first to study at an English university. So Darwin came to Christ’s College and was admitted as a full-paying undergraduate or a 'pensioner' . Admissions then were very different from today. Today of course there are UCAS forms, personal statements, interviews and exams to pass. Darwin just had to pay, and subscribe to the Thirty-nine Articles, the defining statements of the Anglican Church. There’s none of that now, the University is open to people from all backgrounds, and of all faiths or none.

Once in, what would a Pensioner like Darwin expect from college life? Well after a brief spell in rented accommodation Charles moved into room G4 in Christ’s, a large, wood panelled room in the beautiful setting of First Court. Everyday he would be woken at seven by the college servant or ‘gyp’, and he was required to go (but often didn’t) to Chapel at half past before being served breakfast in his room. Darwin was allowed to keep a dog, called Shappho, and often practiced his shooting using a candle as a target! The college apparently thought the noise was him cracking a whip!

Today undergraduates are still given accommodation in college. Unfortunately however, there is no wakeup call and no room service for breakfast. As at all other universities students are largely left to cater for themselves, although a lot of students eat in the college halls. In most colleges students do still have the luxury of a Bedder, who empties the bins and occasionally hoovers the rooms. Dogs and shotguns are no longer allowed.

Darwin was perhaps the greatest ever natural scientist. But he didn’t do his undergraduate degree in science, indeed at the time Cambridge did not offer a first degree in science. Although Darwin did take some maths and physics, his main focus was theology (called ‘divinity’). Of course in those days a large component of theology was studying ‘God’s creations’; science was part of religious study and one part of Darwin’s key reading material was Natural Theology by another Christ’s alumnus, William Paley; Darwin had to learn the whole book off by heart!

Lectures were held for a couple of hours each morning, but attendance was voluntary and the young Darwin wasn’t often inclined to bother going. He had been put off lectures in Edinburgh, so missed out on some good stuff! He didn’t even go to Adam Sedgwick’s geology lectures - this is the man who eventually became his geological mentor so it must have been embarrassing explaining that one. One lecture series he did attend, and enjoy, was John Stevens Henslow’s, who lectured on Botany. Darwin and Henslow became good friends. Afternoons were mostly free for horse riding, hunting and beetle collecting. Darwin would have had a tutor, responsible for checking up on his progress and making sure he was ready to take the university exams. In this respect, a year before his finals Darwin had to pass a ‘little go’, an exam to prove he was on track: he passed, just about.

Students today still have a tutor who is responsible for making sure they’re happy at college and helping them with any problems they have. Students also have a Director of Studies who keeps an eye on their academic progress and arranges supervisions. Supervisions are small group classes, usually one teacher and two or three students, which each pupil has once a week for each module they do. Supervisions are one of the unique things about Cambridge (and Oxford), they let you discuss the lecture topics in more detail with an expert and make sure you understand what’s going on. You are also set practice essays and questions to help prepare you for the exams. The work is quite intense, but very rewarding!

Specialist science courses didn’t exist until 1851 and have obviously changed a lot since. Lectures are still mostly in the mornings, for sciences at least. Lectures are still voluntary, but with a Tutor, Director of Studies and supervisors keeping an eye on you, if you don’t go to many someone soon notices! Natural Sciences today is very hands on, and a lot of the teaching is done in practical classes which go along with lectures. For example in the first year you choose three experimental sciencds and maths; most of the experimental subjects have a practical class one afternoon a week. So the opportunity for horse riding and hunting has decreased a bit…

Cambridge itself has changed a lot too. In the early 19th century the University was the dominant force in town; even the mayor had to uphold the privileges of the university and traders had to pay university tax and apply for licences to sell to undergraduates! If they broke the rules they could be fined, imprisoned and banned from talking or trading with university members. Obviously this led to a lot of resentment amongst the town people. 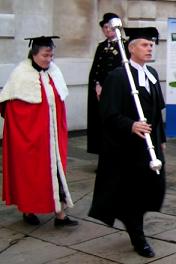 The city streets were patrolled by the University Proctors who were tasked with maintaining ‘public morals’. They had the right to spy, enter any premises and arrest anyone they deemed to be breaking the regulations. Three of the most tightly upheld rules were that students must stick to curfew, always wear their cap and gown, and they should never be caught with a lady! Women of course could not study at Cambridge, and it wasn’t proper behaviour for the male students to be distracted by the local females, although the ‘siring of bastards’ by students was still quite common. The Proctors even had their own jail, mostly used to confine ‘lewd’ women.

The University opened its doors to women in 1869, although they were not awarded degree titles until 1921 or full degrees until 1947. Now of course there is no gender discrimination, although women are still in the minority in science. For those who come to Cambridge with families, there is plenty of support. Curfews are gone so students are able to do the normal student things and don’t get locked out. Even gowns have been shrugged off, largely used just for formal occasions and dinners.

Proctors still exist but without the sorts of power they formally had; you can read about their current roles here. Cambridge has grown rapidly, becoming a city in 1951. The University continues to have a big presence, but the city is run like any other. Some people still say there is a tension between the university and the city but they are interdependent and as a student there’s no obvious sign of this.

In spite of all the myths and rumours about life at Cambridge, it is full of normal people from normal backgrounds, enjoying the chance to live and study in one of the best universities in the world.