Darwin is best remembered for his work on evolution. Before the publication of his famous On the Origin of Species Darwin had been working on the subject for 20 years. There are many myths surrounding Darwin’s development of his theories. So why did it take him so long?

Darwin saw many things in his formative years, and learnt many too. He had come to understand that the earth changes gradually, he had even seen it happen when he witnessed earthquakes and volcanoes during the Beagle voyage. He had found fossils that showed life was very old, and had good evidence that species multiply; he’d seen the proof in the Galapagos, though it took a bit of a nudge from John Gould to take notice. He’d also read Malthus, and realised that individuals must compete to survive.

Darwin’s conclusions based on all he had seen and learnt? Life on earth has evolved and continues to evolve. Darwin was not the first to conclude this, but uniquely, Darwin had a mechanism that could explain how and why evolution happens; natural selection. 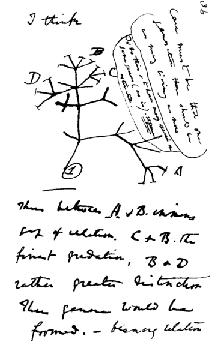 In 1842, seventeen years before he published The Origin, Darwin sat down and wrote out a longer draft of his theory; a 230-page-long ‘abstract’. He returned to it in summer 1844, and expanded the script to 300-pages-long.

The common perception is that Darwin delayed publishing his early essays on evolution, locking them away, because he was nervous about how they would be received. The story goes Darwin saw how the publication of Vestiges of the Natural History of Creation (which was published anonymously, authorship was later attributed to Robert Chambers) caused a massive stir, watched as its author was vilified and decided he didn’t want to risk a similar fate.

The Vestiges was a radical book, a thrillingly written tale of how all life had come from simple beginnings and by ‘transmutation’ developed into its current forms. Indeed evolutionary ideas were on everyone’s lips. But for all its lyricism and clever writing it was far from scientific and it was lambasted by scientists (if you ever want to miff off scientists the easiest way is to try and pass off ideas with no evidence or scientific basis as ‘fact’ or ‘science’). Darwin himself wrote to his friend Hooker ‘his geology strikes me as bad, & his zoology far worse’.

In addition it is often claimed Darwin was worried about the effects his ideas would have on British politics and the uneasy relationship between the classes. Transmutation and Malthus’ ideas on population growth were wrapped up in politics. Europe was reforming itself, in Britain the Poor Laws were introduced, removing people’s right to charity, sending millions to either poverty, hunger or to the miseries of the workhouse. Might Darwin’s theory, with its ideas of competition between individuals, destabilise the nation’s working class leading to a social revolution?

As exciting as this sounds, research by Dr. John van Wyhe, a historian of science at the University of Cambridge, shows that there is no evidence that Darwin delayed publishing his ideas for any other reason than because he was busy with other projects. Darwin spent ten years writing up and publishing his notes and observations from the Beagle voyage, producing five books. He then spent eight years working on his monograph of living and fossil barnacles. At the same time he had a growing family, unstable health, had to manage his finances and he also took a great interest in helping his local community. Darwin did not have the time to finish his work on evolution during these years, though he continued to read, make notes and think about the subject.

Darwin’s early sketches were also not his final word on evolution. During the 20 years during which he developed his theories before the publication of The Origin Darwin refined and extended his ideas as he came across new and more information. In addition Darwin put a large emphasis on collecting evidence to support his theory; this required time.

It is also not true that Darwin kept his theory a secret. He discussed it openly in letters with many of his friends and colleagues, and sent off many more letters asking various experts questions relating to his developing theory.

Darwin was a remarkable scientist, both in terms of the quality and quantity of work he produced. He was also not a one trick pony; natural selection was one of many contributions Darwin made to science. Given how busy he was, how hard he worked, how much information he gathered and how many experiments he performed in order to develop and support his theory the delay in publication is quite understandable. As Darwin’s friend, the Harvard botanist, Asa Gray put it 'I do not think 20 years too much time to produce such a book in'.

Darwin received great acclaims for his Beagle and barnacle work, he won medals and invitations to join the great scientific societies of the day. Once again he returned to his sketches and set about righting his ‘big book’ on species, it was to be large, it was to be technical and scientific. But it was never to be finished.

Darwin was forced to play his hand early by a letter that arrived from Alfred Russel Wallace, a young British naturalist working in the far east. The two men had exchanged a few letters, each briefly mentioning their ideas but not revealing too much. In June 1857 a package arrived from Wallace containing an extended essay which basically outlined Darwin’s own work, and it had also been triggered by reading Malthus. Darwin was very distressed. He was already in a fragile state as Emma had just given birth to his 10th child, Charles, who was mentally disabled, his daughter Etty was ill with diphtheria, many local children had started to die from scarlet fever, and now here was Wallace asking him to send his essay to Lyell if he thought it was any good. He wrote to Lyell and Hooker to ask for assistance. During this period, young Charles died from scarlet fever.

Darwin’s friends Lyell and Hooker decided that Darwin was unable to deal with everything so took charge. They arranged for Darwin’s 1844 paper, a letter he’d written outlining his theory to Asa Gray and Wallace’s essay to be brought up at the Linnean Society of London’s annual meeting. The society saw no reason to go against such eminent figures and Darwin’s precedence was accepted, but he was panicked. Wallace accepted the decision. 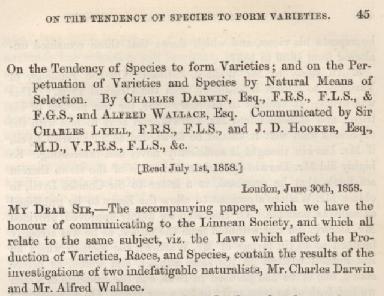 Back in Kent, the scarlet fever epidemic continued so Darwin sent his children to his sister in law’s house in Sussex before the whole family moved to Shanklin, Isle of Wight. He spent 18 months writing and having water treatment. With regular commenting from Hooker and Lyell the book neared completion and Lyell persuaded his publisher to take the book unseen at a generous price. By the start of October it was finished but Darwin's health had suffered severely so he disappeared to Ilkley, Yorkshire for more hydrotherapy. On the Origin of the Species went on sale on 24th November 1859 and sold out immediately to the bookseller trade. Many important scientists wrote to Darwin to congratulate him and the anatomist Thomas Huxley who had been a major critic of previous transmutation theories told him that he was very impressed, and that though he was to meet with much opposition he had ‘fighting friends’ on his side, including himself. Darwin was delighted.

He wrote to Asa Gray to ask him to organise an American edition. Huxley favourably reviewed the book in The Times on Boxing Day. In the new year, however, critics began to emerge, including the astronomer Sir John Hershel. The man and monkey debate was raised as a major criticism along with the lack of room for Divine Purpose, and the debate became the major talking point through 1860. Supporters and opponents appeared from both the scientific community and the clergy. In science it was mostly younger men who approved and older men who did not, with anatomists Huxley vs Richard Owen being the firiest row.

In June 1860 there was the Annual Meeting of the British Association for the Advancement of Science. Darwin was too ill to attend but Hooker and Huxley went. Samuel Wilberforce, Bishop of Oxford, ridiculed Darwin’s theory. He was an excellent orator but Huxley could see that he had not read the book and was simply presenting Owen’s views. He responded by dissecting his speech, honing in on an ill-advised joke about ape grandfathers to suggest that the opposition were not taking the matter seriously. Darwin read the review of the debate in the newspapers and felt his side had won the day, but was thankful he hadn’t had to fight for himself.