Darwin had published his great work on evolution. He was recognised as a leading geologist and zoologist, but still Darwin continued to work as vigorously as his health would allow him. He still had a lot of great science to do!

There were many reasons why people opposed The Origin. Some feared they could no longer rely on their faith and others feared its effects on social order as radical magazines had seized upon it to further their causes. The link between man and apes fascinated the ordinary man and those who couldn’t afford to buy the book packed out lectures on the subject. Huxley grew in his determination to publicise the theory, a view that was strengthened by the death of his four-year-old son and the Church’s words regarding such a loss. He went on a tour of the country giving lectures to working men.

Darwin, meanwhile, was increasingly fragile. He could not allow his mind to stagnate so sought out orchids around Down House after becoming interested in them on holiday. In May 1862 he published a book on them and their relationship with insects, showing how they had evolved together. In January 1863 the fossil Archaeopteryx was found, with traces of feathers, teeth and a bony tail. This showed that birds and reptiles had a shared origin and gave further weight to Darwin’s theory. Late 1863 was miserable for him as he succumbed to poor health yet again, but the following year Gray sent him some cucumber seeds which led to an interest and so a monograph on climbing plants. He was awarded the Royal Society’s Copley Medal, much to the chagrin of the older members of the society.

The next year saw several tragedies. In April 1865 FitzRoy committed suicide, depressed by his failures and stress; then in 1866 Darwin’s sisters Catherine and Susan died within a few months of each other; his brother Erasmus dealt with selling off the household. Darwin continued to work on new ideas and by the end of 1866 had written a large tome on the domestication of animals. He realised that he had still to explain how heredity worked, so he developed ‘pangenesis’, a theory of heredity whereby each organism had ‘gemmules’ given off by each cell containing the information that led to the formation of its offspring. This was published in his book The Variation of Animals and Plants Under Domestication. The next major argument to make concerned human origins.

While working on the third instalment of his work on species, Darwin found time to alter parts of The Origin. One influential critic was the physicist Sir William Thomson, who had calculated the age of the earth and the sun’s heat output and come to the conclusion that Earth was too young for Darwin’s changes to have occurred. Although geologists had known for decades that the earth must be far older than Thomson’s calculations allowed, the claim did bother Darwin. Darwin’s son George had just graduated in mathematics from Cambridge and was able to find enough errors in the calculations to cause doubt, but as it was not known how radioactivity affects the cooling of rock he couldn’t totally dispel them. 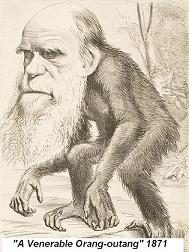 Darwin’s sixtieth birthday saw an improvement in his health and he began to attend dinners and visit people once again, including meetings of the Royal Society. In February 1871 he released his book on man – The Descent of Man, and Selection in Relation to Sex. People were comforted by the fact that as well as scientific theory Darwin also included a (sign of the times) social interpretation, explaining that it didn’t matter where they started from because as white Englishmen they had reached the top of the evolutionary tree. The sixth edition of The Origin was due to be published and was to be aimed at a price that the better paid working man could afford so Darwin made some more alterations and in 1872 sales of The Origin quadrupled.

There were few notes left that Darwin had yet to write up, but there were still some. His notes on Jenny the orang-utan and on baby William were used alongside letters he had received regarding the behaviour of animals and races of people from around the world to produce a work on the way in which humans display emotions, published in autumn 1872. He settled into botany, and said he had given up theorising, instead publishing several books about plants.

An Old Life And A New

In the summer of 1876 he wrote some notes on his own life for information for his family. It was a series of recollections and thoughts to let his children know what he had done and who he was as he approached seventy. He wrote about his religious beliefs – which he had avoided discussing in public - that disbelief had grown slowly and he had never doubted that he was correct. He also marvelled at his influence in science, commenting that he was not especially quick-witted but perhaps was better at observing than most.

Bernard, Darwin’s first grandchild was born to son Francis and his wife Amy on 7th September 1876 and Emma and Charles were delighted. This was, however, short lived as Amy died of puerperal fever a few days later. Francis was devastated and moved back into Down House with Bernard, who was looked after by Emma. Francis became his father’s assistant. In November 1877 Cambridge University gave Darwin an honorary doctorate and he travelled to the Senate House to receive it himself. Huxley noted that he never appeared on the Honours List. 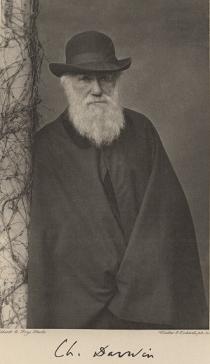 There was one last topic that Darwin had a passion for that he had yet to write about: worms. He brought them into the house and had Emma play the piano to them to see if they responded to music, he shouted at them, smoked at them and threatened them with a poker, he shone red and blue light at them and offered them different coloured cabbages, he watched them navigate burrows and observed their sexual behaviour. Once his work was published, and it was a massive success, he felt empty. Emma took him to the Lake District with Bernard, where he enjoyed the scenery but felt the cold.

He sat for an official portrait and joined the Prince of Wales for the International Medical Congress opening dinner. In August his brother Erasmus died. Emma and Charles decided to visit Etty and her husband in London in early December and stay for Christmas. When he was out one day he had severe chest pain and hailed a cab back to her house. The doctor couldn’t see anything to worry about so the family carried on preparing for Christmas. Hooker and Huxley came to visit. In March 1882 he had further severe chest pains whilst walking the Sandwalk at his house and after staggering home was diagnosed with angina. On the 15th April he had a relentless pain in the head at dinner and fainted, was revived and seemed improved for a few days but collapsed again on the night of the 18th. In the morning of the 19th he began retching terribly. Francis and Etty arrived to be by his side. With his family around him he said he felt he would faint so Emma came and cradled him. He lost consciousness in the afternoon and died.

The family arranged for him to be buried with his relatives in Downe churchyard but Huxley encouraged the President of the Royal Society to write to them to ask for him to be interred at Westminster Abbey. Darwin’s neighbour was a Member of Parliament and got a petition of Parliament Members together. The Standard newspaper also took up the cause. The family gave in to the pressure and hurried rearrangements were made. The Times compared him to Newton, a ‘giant of scientific thought’. Papers across Europe and America were full of grief. On the 27th April he was brought in a carriage to London and buried on the 28th in front of a congregation of politicians, ambassadors, scientists and society presidents. Emma did not attend, choosing instead to stay at Down House. One of the most influential characters of the 19th century passed into history. 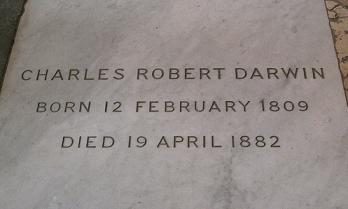