The whole idea of natural selection rests on the gradual adaptation of organisms to their environment. If the environment changes, some individuals will have characteristics that make them better able to cope than others, and these individuals will be more likely to pass on their genes to future generations. 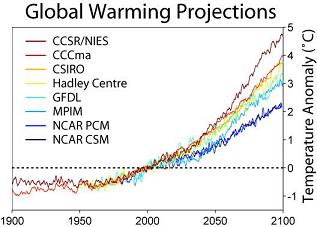 The environment is changing. It is now widely accepted that carbon dioxide levels are rising and that this is causing temperatures to increase via the greenhouse effect. Global warming is a reality, and it will have major effects on many aspects of our environment, including...

These changes will and are already affecting life on earth. We are already witnessing changes to the genomes of organisms resulting in shifts in metabolic rate, breeding season, migration patterns, disease dynamics and food availability. All of these changes will upset the delicate balance of ecosystems.

Recent studies suggest the possibility of mass extinctions as a result of these changes – this is because rapid changes in the environment are likely to be challenging for organisms as they have adapted over thousands of years to suit particular niches (roles within the community). Some may be suited to the new environment but others will be forced to evolve in new ways to survive in the new environment. As a result there is a possibility that the rate of evolution may rise as selection pressure increases, and as a result large changes to biodiversity may result.

Adaptations To Changes In Seasonal Timings

The changing climate is already resulting in earlier springs, longer summers and milder winters. It is this, rather than direct temperature change, which many organisms are battling against. 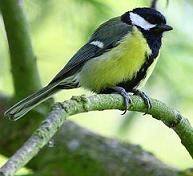 During the past forty years, scientists have observed species migrating, reproducing and developing earlier. A good example of this is the European great tit. European great tits are evolving different breeding times to ensure maximum food supplies to increase offspring survival. This is because Winter Moth caterpillars are maturing earlier in spring due to rising temperatures and these caterpillars are a staple food source for these birds. So individuals which can bring forward their egg-laying ensure greater food availability for their chicks and so these individuals are more successful. Research has shown that birds lay their eggs two weeks earlier than they did in the 1970s, a clear example of how organisms are altering in response to global warming. Similarly, Canadian red squirrels are breeding earlier allowing them to gather more pinecones to tide them over during winter.

Another example is the mosquito Wyeomyia smithii. In response to changes to length of day insects are developing later and gradually the genomes of northern individuals are coming to resemble more closely those of insects living near the equator.

In fact, several species depend on day length to tell them when to migrate, mate or go into hibernation. Other cues such as daily length of warmth (thermo period), rainfall and food availability are also crucial in allowing organisms to decide when to perform these tasks. Global warming is affecting all these cues except for day length and this means that organisms need to adapt to their new environment. An example of this is that some birds, such as the European blackcap, have started to forego migration from the UK over winter, allowing more successful reproduction due to a decrease in energy expenditure during flight and increased time to find nests and mates.

We have seen that certain species are already adapting to new conditions brought about by global warming. But will all organisms show this adaptability, or will some simply lose the struggle for survival?

The answer is not yet clear. While some people think that there is little threat to species’ survival, others are more concerned. Several scientists believe that significant changes to ecosystems will reduce species richness and some even think that 10-20% of all species could become extinct by 2020 as large temperature changes wipe out species unable to adapt fast enough, and events like flooding and forest fires destroy entire ecosystems. Less directly, organisms could be affected by disease, by the presence of new invasive species, by changes in food availability or through the loss relationships with other species which may become extinct (such as crucial pollinators).

Others are optimistic, speculating that the warming couldpromote diversity, by altering dispersal routes or creating new areas of habitable land.

So who is right? It is hard to say, but we can get some clues from looking at what similar changes to the climate have done to biodiversity before. At least four times in earth’s history there have been major extinction events associated with climate change. It is even possible that all five major extinction events (the Ordovician, the Devonian, the Permian, the Triassic and the Cretaceous) were climate change related. In one of these events 250 million years ago, it is thought that about 95% of ocean species became extinct, while 75% were wiped out on land. This does not bode well for species diversity during periods of rapid climate change and it seems that species will need to adapt rapidly to survive such rapid and extensive change. As a result some species with long generation times and low genetic variation and phenotypic plasticity are likely to become extinct. There may, however, still be hope – if we start doing something about climate change now, we may be able to minimise its effects on fragile ecosystems.

Will Evolution Step Up A Pace?

So there is precedent for rapid climate change leading to catastrophic extinction events but there is some evidence that the rate of evolution may increase as the earth heats up.

It has been shown that bodily functions of squid living in warmer water become faster allowing greater levels of reproduction, meaning that there is a larger population with the potential for greater genetic variation due to random mutation events. It follows that with increased genetic variation in the population and increased pressure to adapt, evolution by natural selection should occur faster, always providing that temperatures do not increase so drastically that the entire population dies.

Looking at past events can often be useful in predicting the future, and it appears that an increase in temperature 50 million years ago resulted in a great diversification due to an increased rate of evolution in insects and bats. This is in fact thought to be the point at which several types of bat evolved aviation and sonar abilities to seek out their newly evolved insect prey.

So climate change is expected to have many effects on the biodiversity. However, one ecosystem particularly important in any discussion of global warming is the oceans. They act as giant sponges soaking up carbon dioxide and locking it away for many years in the bodies of sea creatures. Amazingly, a third of carbon is thought to be absorbed by oceans in this way but, as the levels of carbon rise, oceans are unable to keep performing this function. Carbon dioxide forms carbonic acid on dissolving in water, the hydrogen ions released when this dissociates are normally neutralised by carbonate ions from rocks and sediments. If too much acid is formed in too short a time this buffering system fails and the pH of the sea falls (the water becomes more acidic).

Ocean acidification is one dramatic consequence of global warming but what will this mean for evolution? Many sea creatures, from plankton to coral, use calcium carbonate to make bones and shells. If the ocean acidity increases then the concentration of carbonate ions decreases, so it becomes more difficult for organisms to create these vital structures. Even worse is the possibility that they might start to dissolve if the water is no longer fully saturated with carbonate. These creatures must, therefore, adapt to survive or else become extinct.

Evolution has shaped our past and made us what we are today. It has created the variety of life that we see around us. It is tempting to see species around us as constant since evolutionary change is such a gradual process. As a result it is easy to come to a false conclusion that evolution has stopped. However, evolution is still happening and cannot be separated from current day issues such as climate change.

Global warming, with its inevitable effects on so many aspects of our world, will inevitably change the course of evolution – and evidence that this is already happening is all around us. There are still areas of speculation, but studies of the effects of past climatic events are strong indicators that changes in biodiversity are coming. It is probable that large animals with long generation times and smaller populations will face extinction due to lack of genetic variation. Smaller animals with short generation times and large populations are more likely to be able to adapt to the new environment they find themselves in.

Accepting that humans are primarily responsible for global warming means that we are also responsible for these changes in biodiversity. This may seem frightening, but it has happened before – humans have been altering the course of evolution by selective breeding for centuries. The difference this time is that we are not intentionally selecting traits or able to predict outcomes.

These evolutionary changes have the potential to affect us detrimentally. We depend on so many species for food and resources, especially plants, that loss of these could seriously affect our quality of life. This provides an even more immediate reason for thinking urgently about what we should do to try and preserve species diversity. Kew gardens in London has started conserving seeds in the ‘Millennium Seed Bank’ project, which holds around 20,000 plant species in cold storage. It intends to store 25% of the world's plant species by 2020. This should ensure that we retain a portion of the world’s biodiversity in case many rare species become extinct. This is, however, clearly not a complete fix. If we are going to survive in the world we are creating we need to think long and hard about how the changes we are making will affect the delicately balanced ecosystems around us and how we can protect ourselves against the most detrimental of these changes.

To find out more about how scientists play a role in conservation issues read the article on conservation (earlier in this sec section). Many researchers in Cambridge work on issues relating to global warming. For example Prof. Bill Sutherland is developing predictive models of environmental change, Dr. Chris Hope is based in the Judge Business School and has carried out award winning research on developing models which assess the financial cost of climate change, and the Cambridge Centre For Climate Change Mitigation Research is at the forefront of research aiming to develop strategies to combat man made climate change.