Evolution is the slow process that changes animals and plants and it’s a great piece of science! It describes loads of things in nature like fossils, peacocks' tails, lions’ teeth, birds’ wings and human brains, just to name a few. It is also supported by lots and lots of evidence that has been collected by scientists for more than 150 years! Some people think it’s not true. They prefer religious explanations of why nature is like it is, but the evidence says that evolution is the real explanation.

What Is A Species?

A species is a group of animals or plants that are very similar. Members of a species share the same characteristics. For example the species pet cats belong to all have sharp teeth, retractable claws, fur, a tail and the same number of toes and nipples. Members of our own species, Homo sapiens, to give it its proper name all walk upright, have some sharp teeth and some flat ones, our eyes point forwards, we have some hair but not all over and we have pretty big brains!

Of course you can’t go around trying to force lots of animals and plants to mate with each other! Scientists can use other more subtle measures, for example if two groups of birds look really similar but sing different songs and don’t seem to find each other attractive, it's a good bet they are different species.

How Do Species Evolve?

So what makes all the species different? Charles Darwin had the answer! Animals and plants produce too many offspring. Think about how many tadpoles you see at the start of spring, and how few frogs you see at the end of spring. A lot of them die, because there is not enough food to go around. Of course they all try their best to get all the food they need, so they have to compete with each other.

Darwin realised all the members of a species are unique, they are all slightly different. Sometimes this can be the difference between life and death! Think about a bird which eats seeds which have a tough case like a nut. When nuts are in short supply only the really strong birds with big beaks will be able to crack them open and eat them. Since they get more food, they will be less likely to starve or get sick.

Now, since offspring inherit a lot of their characteristics from their parents birds with big beaks will have chicks that grow up to have big beaks too. So over many generations the average beak size in that group of birds which struggle to crack tough nuts will increase. Each generation changes by a really little bit, but all these changes can be added up over time to make a big difference: that’s evolution! Darwin called this process natural selection.

When Darwin told the world about his discovery in his book On the Origin of Species he didn’t really say anything about humans other than to hint his ideas would reveal the secrets of human history. But the message was clear; natural selection is the process which has shaped all species, including us!

Other scientists wrote books about human evolution, often comparing our bones to those of apes and monkeys. Eventually Darwin decided to write a book about it too to set the record straight about what the thought about humans. He wrote a book called The Descent of Man. He presented lots of evidence to support the theory that humans evolved from apes. He also argued that all the different human races were one species, which was a keenly debated subject in Victorian times. 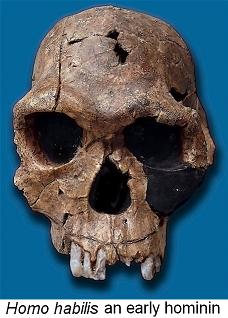 We now know lots more about evolution, and all proper scientists agree Darwin was spot on! But how do we know?