The work of Gregor Mendel laid the foundations for genetics. Initially his work went unnoticed and when it was finally recognised his findings were seen as being an alternative to Darwin’s work. But the Modern Synthesis brought the ideas of the two great scientists together to form the basis of modern biology.

Who Was Gregor Mendel?

Mendel was born in 1822 in a town which is today called Hynice, located in the Czech Republic. Quite like Darwin, Mendel was a nature enthusiast from birth; he learnt to keep bees at a young age and was a keen gardener. Mendel’s family was poor so to secure a good future he joined an Augustinian Abbey in 1843 where he trained for priesthood. He was ordained and for a while taught in a local school. In 1851 Mendel went to the University of Vienna where he mostly studied physics before returning to the abbey. 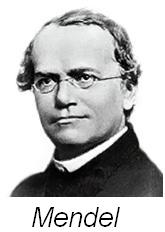 It was at the abbey that Mendel began his famous experiments on peas. In 1854 he obtained 34 varieties of pea from local growers from which he identified seven "characters" which showed discontinuous variation:

He experimented with crossing the pairs of peas and recording what characteristics the following generation had. He would cross the offspring too, and performed a range of different experiments. After eight years he summed up his results and made his conclusions. These are now known as Mendel’s Laws.

Mendel’s results are now summarised into the Law of Segregation and the Law of Independent Assortment. In modern terms the Law of Segregation states that each individual has two copies of the information, or "gene", that produces a certain characteristic. These two copies are now called alleles, and the offspring receives one allele (only) from each of its parents. The Law of Independent Assortment states that there is no mixing between the genes for different characteristics; they remain separate entities. Mendel also concluded that one of the two alleles is always dominant over the other. Of course this is not the language Mendel used, as he had no concept of a gene or allele, but he explained his results beautifully and clearly so that the implications were there for the scientific society to see.

Mendel presented his results in 1865 to the Brünn Society for Natural Science, titling his paper Experiments in Plant Hybridisation (but in German). Little attention was taken. A few months later he was asked to write up his results for the society’s publication, The Proceedings of Brünn Society for Natural Science. Mendel was clearly pleased with his work:

‘My scientific studies have afforded me great gratification; and I am convinced that it will not be long before the whole world acknowledges the results of my work.’

and asked for 40 copies to send to scientists himself. We don’t know where all of them went, but some of them went to leading Professors of Botany at Munich, Vienna, Innsbruck, Amsterdam and Graz. In many cases the envelopes weren’t even opened; the advice he did get from the recipients was to give up on peas and try something else! Later in Mendel’s life he became a major figure at his monastery so had less time for experimentation, though he did try breeding bees and some other plant species. He died in 1884 having made little impact on the scientific world.

It was not until 1900 that Mendel's work was rediscovered, by Carl Correns in Germany, Hugo de Vries in the Netherlands and Erich von Tschermak-Seysenegg in Austria. Later that year William Bateson heard of the discovery and spread the word and began advancing, applying and improving upon Mendel’s work.

Mendel is now regarded as the grandfather of modern genetics; why did he not get more credit at the time? It is difficult to say, but probably the fact that no one knew his name and that Mendel described his results using mathematics rather than prose had some effect.